Where Do Some of Our Christmas Traditions Come From? Part 2. 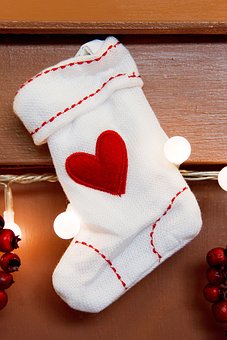 Today, I'll provide additional information on where some of our Christmas originated.  Its always interesting to me to find out the history of various traditions.

1. The use of the  Christmas Tree as an evergreen has been around for centuries because it was used to decorate the houses as a reminder that spring would come.  There are stories of the evergreen trees appearing in various celebrations and pictures but Christmas tree appeared in Germany where they were decorated with edibles and small glass decorations by the early 1600's.

The first real use that popularized the tradition occurred in England in the first half of the 19th century when Prince Albert (Queen Victoria's husband) had a tree set up at Windsor Castle in 1848.  A drawing of the family and the tree appeared in local papers and in 1850, the same drawing appeared in an American publication, popularizing the tradition in the United States and in the United Kingdom.

2. Leaving milk and cookies out for Santa may date back to Norse times when they believed that Odin had an eight legged horse called Sleipner.  Children would leave treats out for the horse hoping that Odin would leave gifts for them. The practice became popular again during the depression  because parents wanted to impress on children they should be grateful for anything they got.

3. Apparently, Christmas cards originated in England in 1843 when a civil servant set up the first post office and wondered how he could get common people to start using the service.  He got an artist friend to create the first cards, he sold at one shilling each.  The first card had three panels, two of which showed people helping out the poor while the middle panel showed a large family having Christmas dinner and at the bottom it read "A Merry Christmas and a Happy New Year to You".  There were only a thousand printed then but only a few still exist.

It wasn't long before Christmas carols appeared in the United States but they were extremely expensive.  As printing methods improved, Christmas cards became more common and the cost of mailing a card dropped in price so it was more easily afforded.  By the 1870's a man from Germany began mass producing cards so more people could afford them and they took off.   Annie Oakley is responsible for personalized cards when she sent cards from Scotland back to her family in the states in 1891.  Her cards had a picture of herself on the front.

The tradition of placing seals or stickers on Christmas cards began in early 1900's in Denmark as a way of raising funds for charities.  The idea was so successful that four million were sold in its first year.

4.  Christmas candy canes appears to have originated in Germany just over 250 years ago as straight white sugar sticks. The story goes that a choir master in 1690 was worried about his young singers being able to sit through the service so he made the sticks a J shape to remind them of the shepherds with their crooks.   Since the earliest records date from about 200 years later, this is probably not true.

Records indicate they began again in the late 19th century but the red stripes were not added till the early 1900's when they were flavored with peppermint or wintergreen.  In 1920 a man began making them for friends and families but a machine to automatically turn them into the shape J did not come till a bit later when his brother in law designed it.  Eventually the business became known as Bob's Candies which was sold out in 2005.

I hope you enjoyed these stories.  Tomorrow I'm going to look at a program that looks at the origin of words in the English language.  Let me know what you think.  Have a good day.
Posted by Lee MacArthur at 4:00 AM