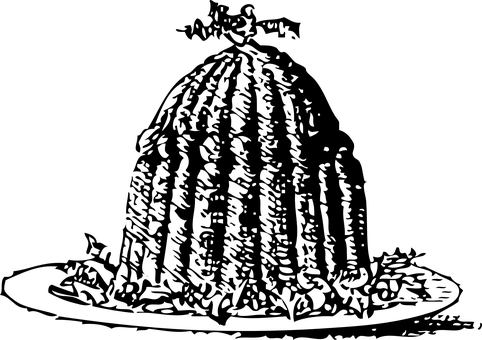 I don't remember what I was reading but the character in the book commented there are no plums in plum pudding but I remember a rhyme where Little Jack Horner stuck his thumb in the pudding and pulled out a plum. So what is the truth?

In reality, pudding is the English term for dessert but over time, its come to mean a specific type of dessert.  Figgy Pudding or Plum Pudding are a specific cake like version of Christmas Pudding.

It is traditionally made of dried fruit such as figs, plums, raisins and prunes mixed with eggs, citrus zest, nuts, breadcrumbs, and suet.  Once its mixed up, it is placed in a pan, covered with parchment paper before being steamed for a long time, till done.

Its often made anywhere between four weeks and a year ahead of time.  When ready to serve it, it is placed on a plate, doused in brandy, then lit before being served.  It can be served with a brandy butter, hard sauce, or custard.

It is believed that the person who makes it and any family member who stirs the batter should make a wish.  Furthermore, it is traditional to place a coin in the batter before being cooked. The person who gets the coin is said to get good luck throughout the following year.

The earliest records indicate the dish has been around since the 15th century as a plum pottage a mixture of meat and root vegetables often served at the beginning of the meal.  Plum simply referred to dried fruit.  By the 16th century, dried fruit was much more available so the dish moved to being a sweet.

In addition, the invention of the floured cloth, made plum pudding easier to fix since the cloth  could hold and keep it.  This meant the pudding required fewer animal products although suet, the fat around the kidneys is still a key ingredient.

It wasn't until Victorian times, when journalists, writers, and politicians worked to standardize the family Christmas.  Among the poor, saving clubs sprung up so women could save money so they could purchase the ingredients needed for a proper Christmas dinner including the pudding.

Due to its nature, it could be shipped overseas to sailors and military men so they could enjoy something of home during the holiday season. Over the years, the recipe has changed so its less globby and much easier to eat.  Its even possible to find both vegetarian and vegan versions of this historical dish.

One of my aunts had her version for this particular dish but it resembled my mother's fruit cake.  Both were heavy and better suited for door stops.  Check back on Monday for a quick look at the history of fruitcake.

Let me know what you think, I'd love to hear from you.