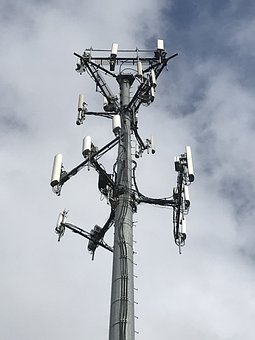 As you know, I live out in the bush area of Alaska where there are no roads, few cars, and way more boats, ATV's, and snow machines.  Everything is more expensive, even the cell phone and internet.

The internet is provided via a relay tower out on one of the mountain whose name I cannot pronounce, let alone spell.  The relay provides service for at least two villages, possibly three.

Unfortunately, due to its location, the relay is out in all sorts of weather which this year has proven to be an issue.  Since the beginning of March, internet service has been up and down.

Some days it's more up and others its totally down.  We are trying to do state testing using computers but that has been problematic with the unreliability of the internet.

It got so bad, that service totally went out for a while and the internet provider sent out a military grade portable satellite dish complete with generator to use for testing.  Due to the portability of the unit, it had to be set up every morning and taken down every evening to keep anyone from running into it with their snow machine or ATV or have someone run off with it at night.

It took a bit but they got it up and working and we had internet for a few days but then it developed issues so a second one was sent out to replace the first one.  They got it up and working for one day but by Monday, it was out again.  At this point, the school decided to go with the original internet in the hopes, it would be up enough to support the computerized testing.

About the same time, I called in to the provider on my landline to complain about the lack of cell service and internet service.  It was at this point, I discovered they knew about the relay being covered in thick ice and snow and that they couldn't do anything to fix it until the icy covering has melted.

The representative I spoke to gave me the number of the open ticket so once the relay is up and fully running I can call in and demand they refund me money since I did not have service the whole time.  I have service but its still up and down with no rhyme nor reason.  I'll be writing and its up, then I try to post something and it goes down.

Other people have called in only to be told there was not problem or outage.  The representatives told them, the whole outage thing was a figment of their imagination.  Now that I have a number, I'm sharing it with everyone at work so they can demand refunds once the relay is up.

Just in case you are curious, you have to ride a snow machine across the snow covered land to get to the relay tower in order to fix it, or you have to go out by helicopter.  Our technology person found out when they sent the first satellite out, someone had been out to the tower but it was covered with so much ice and snow, they could not fix it or get through enough ice to find the problem.

Living out in the bush of Alaska, means we have a few more issues than most everyone else and its harder to get things fixed out here.  Yes, I sometimes miss living where there are real airports, stores, and book stores but right now, this is where I am.

Have a good day, and let me know what you think, I'd love to hear.
Posted by Lee MacArthur at 4:00 AM