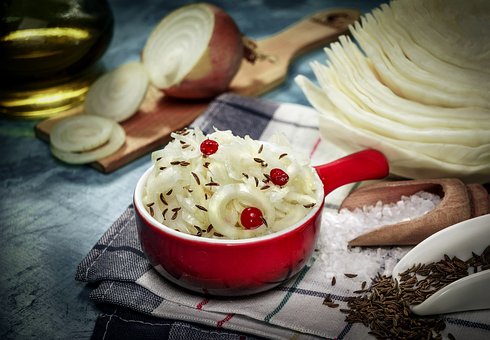 Lets start with the difference.  For instance most pickles sold in the store and most that I've made are pickled because they are preserved using an acidic liquid usually known as vinegar or in a brine made with salt and water.  To be fermented, the pickles have to have some sort of starter used to create the acid liquid which can be reused.  It means fermented foods are preserved by a good bacteria such as the lactic acid bacteria.

The reality is that fermented foods have been around for a very long time because fermentation is one method used to preserve foods.  Some foods we really don't think as fermented are such as yogurt.  Many of these foods are being promoted as ones which can help our health but is this true?  To some extent it is.

If you regularly consume some of these foods, you are adding friendly bacteria to your gut to help keep it healthy.  Scientist know that you need the bacteria in your gut but its effects are not fully understood.  They know it can influence metabolism and help the immune system.  They also know if you have a healthy gut where you have more good bacteria than bad, your less likely to develop certain cancers.

The fermentation process actually breaks down natural sugars to make the food easier to digest and absorb its nutrients.  The process can also boost certain nutrients in a food such as B vitamins that were not there before fermentation.

Each type of fermented food may help an aspect of your health for instance Yogurt can help prevent heart disease, type 2 diabetes and relieve irritable bowel syndrome while Kimchi can help reduce the possibility of diabetes and obesity.  Unfortunately, solid research is still lagging behind the growing interest in fermented foods.

Several scientists say if you are healthy and eat a good diet, you are unlikely to see any benefits from eating fermented foods but if you decide to eat them, add them in slowly to see how your system reacts.  Sometimes there is bloating, gas, or changes to your bowel habits as you change your diet.  I know from personal experience the changes in bowel habits can occur because they did when I ate the Scandinavian yogurt in Finland during my visit last summer.

If you incorporate it into your diet, how much should you use. The recommendation ranges from one to three servings each day but please remember when you add these foods, you are adding calories to your diet.  Some such as Kombucha have more sugar than other fermented foods because it is based on a sweetened tea.

For the best versions of fermented foods, it is recommended you make them yourself however, if you do not have the time, they can be purchased in the supermarket but you need to look for those advertising live organisms. in the refrigerated section.  Do not buy anything that is canned because it has been heated and may have killed most or all of the good bacteria.

I regularly make and eat Kombucha,  the Scandinavian yogurt, and Kimchee because I enjoy them but I think I will quit making Kombucha because there is only one of me and its hard to go through a gallon every two weeks.  I will probably start it again when I leave the village in another year.

Let me know what you think, I'd love to hear.  Have a great day.
Posted by Lee MacArthur at 4:00 AM