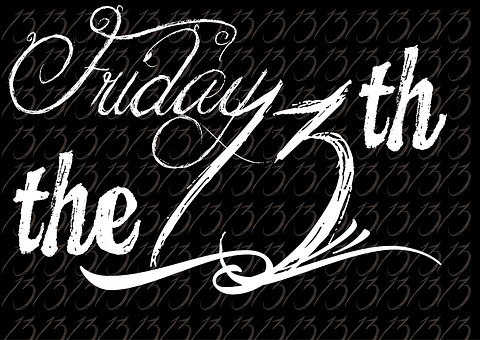 Most days several of us get together to eat lunch in one of the classrooms.  We talk about anything and everything from the latest to whose child is expecting a baby.  We have developed a community.  Last Friday, the conversation turned to a discussion of how Friday the 13th became unlucky.  One woman said she'd heard that the belief came about because a woman had 12 children and her 13th was a demon.

Yes, I know, I know it probably isn't correct but there is such a strong belief in this day being bad that I know of a teacher who took a personal day because of her belief.  So where did that belief come from.  I also wondered where the no 13th floor in hotels came from.  It seems the number 13 in general is considered unlucky.

Apparently there are between 17 and 21 million people in the United States dread the date enough to be officially labeled as having a phobia.  Both Friday and 13 have long been thought of as unlucky but no one is sure when this particular superstition began.  However, references to this particular date being unlucky begin appearing in the late 19th century.

Friday itself is thought to be unlucky because it is believed that Eve gave Adam the apple which lead to their downfall on that day.  In addition, the Temple of Solomon was also destroyed on Friday and Jesus was crucified on a Friday.  Some of the events associated with Friday, may not have happened on that day of the week because Friday didn't exist at the time.  By the way, Good Friday is the exception to Friday's being unlucky.

Others think that this particular belief has been around since the Viking times when they believed Friday, named after the goddess Frigg who was the goddess of many things including death.  The Norse would not marry on Friday due to the connotations of what Frigg stood for.  No matter what, references to Friday being unlucky did not really take hold for the masses until the 17th century.  The idea continued spreading until it was a popular belief in the 19th century.

As for the number 13, it is considered unlucky for several reasons.  I remember someone telling me that 13 was the number of witches in a coven while others have maintained that 13 is unlucky because there were 13 people at the Last Supper with Jesus and the 13th person, Judas, was the one who turned him in for the 30 pieces of gold.  In addition, many societies held executions on Fridays including the Romans.

Other groups such as the Hindi believe you should never have 13 people in any groups while the Norse have their own story of the 12 gods and goddesses who ate dinner and then Loki, the god of mischief showed up to cause trouble.Furthermore, the Egyptians believed in the 13 stages of life where the 13th stage represented leaving this life and moving into the afterlife.

No one is sure when the two ideas combined to create the belief Friday the 13th is lucky actually began.  Some think it has to do with the refusal of King Harold II to surrender to William the conqueror on Friday October 13, 1066.  What is known is that the belief had spread across much of the world by the 19th century.

Apparently, William Fowler created "The 13 club" to prove this belief wrong.  The club had members who met in groups of 13 to eat out and the first event occurred on Friday, January 13, 1881.  In addition, they would walk under ladders, make sure there was spilled salt all over the tables and eat in room 13.  Everything they could do to invoke bad luck.

So the bottom line is simply no one is really sure why or how the idea of Friday the 13th being unlucky came about.  I'd love to hear what you think.  Please let me know.

Email ThisBlogThis!Share to TwitterShare to FacebookShare to Pinterest
Labels: Friday the Thirteenth