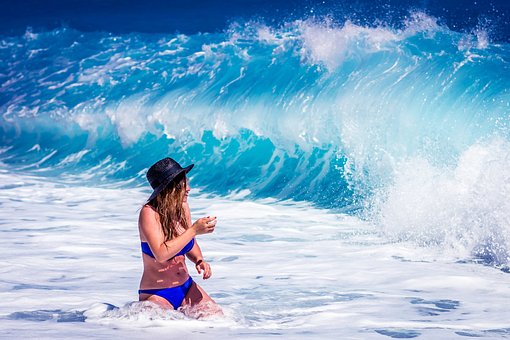 The other day, I watched a Murdock rerun in which the wife wore a black bathing suit resembling a dress with black stockings rather than what we are accustomed to seeing today.

Although there are records of sailors learning to swim naked in the 1200's because its considered a good skill to have and other records like that, swimming itself did not become popular till the 19th century.

Competitive swimming took hold in England in the 1830's  where they used man-made pools for their competitions.  The two most popular strokes were the side stroke and breast stroke.  In about 1873, the free style stroke was first developed but it didn't take off until another person emigrated to Australia to teach swimming there.

Public interest in swimming was ignited in 1875, when Matthew Webb spent 21 hours swimming across the English Channel using only the breast stroke.  His record held for another 31 years before it was broken.  At the first modern Olympic meet in 1896, male competitors swam in four events held in the Mediterranean Sea because there were no swimming pools.

In 1900 at the second Olympics, the events in Paris were held in the Seine River since they didn't have an ocean or sea. Up until 1902, the only stroke used by recreational or competitive swimmers was the breast stroke.  In 1902, an Australian swimmer introduced the "Australian Crawl" known as the freestyle stroke most people use or see today.

Johnny Weissmuller, later known as one of the early Tarzans, broke a record in 1912 while using the Australian Crawl.  1912 sticks out for another reason in that it was the first time women competed in swimming at the Olympics. As people worked to improve strokes, two Americans in the 1930's introduced their version of the breast stroke called the butterfly stroke which was allowed till the 1950's when it was declared a separate stroke.

As far as recreational swimming, it become more popular when railroads made it possible to travel to public beaches in the late 1800's.  Although swimming pools were popular in England, they were not in use until 1887 when the first American city in Mass. built its first pool for the use of its citizens.  Over the years, more cities and rich homeowners build their own swimming pools so that it became possible to enjoy swimming without traveling to the ocean to do so.

In addition, at about the same time as swimming pools became popular, women's swimsuits evolved from dress like to something resembling what we wear today.  Due to Hollywood portraying swimsuits as sexy, the suit itself became smaller and more popular. In the 1920's the first one piece made its appearance.  Unfortunately, it was made of wool which sagged when wet.

It wasn't until the fabric shortages in World War II that bathing suits became two piece and made their appearance in public.  From then on, swimsuits could be found in one and two piece versions.  Over the years, recreational swimming in pools and the ocean have become more popular. It does get warm enough to swim in many of the rivers in Alaska but you are more likely to see children in t-shirts and shorts.

Let me know what you think , I'd love to hear.  Have a great day and enjoy the warming days.

Email ThisBlogThis!Share to TwitterShare to FacebookShare to Pinterest
Labels: Swimming.