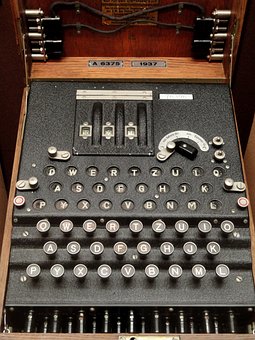 If you've ever watched Bletchley Circle on PBS or seen any other World War II type dramas, they often refer to the Enigma Machine the Germans used to produce a code that was hard to break.  I was investigating cryptography and matrices for a math class and discovered there was more than one Enigma Machine.

As a matter of fact, a German engineer began manufacturing them in the early 1920's when he formed a company in Berlin to build a machine based on a Dutch patent he'd purchased the year before.  The first model resembled a typewriter and typed messages on paper so it's name in English meant "Writing Enigma".   Unfortunately, it was not the most efficient machine due to problems with its print wheel so within a year, a new version came out.

Both of these machines were extremely expensive to produce so its customer base would be quite small.  So the second model was replaced by a third model that looked much like the Enigma machine most people are familiar with but the keys were alphabetical rather than using the standard QWERTY arrangement but it only cost one eighth the amount of previous machines.

Over the next 8 years, the company kept improving on the machine until they created the military version in 1932 after creating a variety of commercial versions. This one had advanced wheel turnover mechanisms driven by cogwheels rather than the older levers and pawls.  From this point on, all commercial and international sales had to be approved by the German Army.

Then they began selling machines to the Hungarian Army, the Dutch, and the Swiss but the Germans began preparing for war so they increased the number of machines they had but in 1933, three brilliant Polish mathematicians managed to figure out the internal workings of the Enigma machine.  At about the same time, a German in need of money sold information on machine's operating procedures to the French who forwarded the information to the Polish who were able to reconstruct the machine.

The Germans used the basic settings up until 1938, when two more wheels were added to the machine to make encryption harder to break but the Poles managed to obtain the information needed to update their machine.  At this point, aware they needed to get the machine out to others, so they met with the French and the British in 1939 where they gave each group a reproduction of their machine.  The Poles then destroyed all their records and equipment before scattering.  The code breakers headed to France.

A couple months later, the British created Bletchley Park where their code breakers used the Polish machine to help them break German messages.  Due to the capture of code books from a U-boat, they were able to crack Naval code and translate all naval messages. But throughout the war, the Germans made changes by adding additional wheels so the Americans and British had to adjust.  The Germans even made a special machine they could communicate with the Japanese.

In fact there were cipher machines other than enigma used but the Enigma is the one that most people know about.  However, the information did not become available until many years after the end of World War II.  If you'd like to know more about these machines, check out the Cryptomuseum in the Netherlands.

I hope you found the information as fascinating as I did.  Let me know what you think. I'd love to hear.
Posted by Lee MacArthur at 4:00 AM