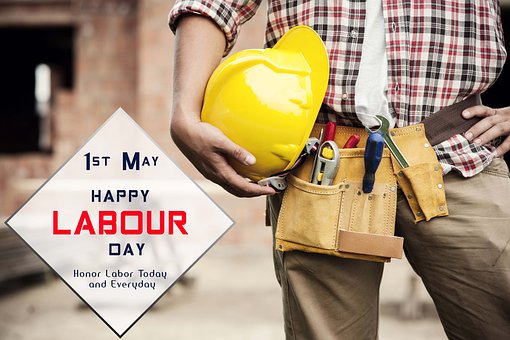 Years ago, when I was in school with celebrated the first of May with games, a may pole, and other fun activities.  It wasn't until later, I learned it also is a day to celebrate the workers of the world.

Apparently on May 1, 1886 35,000 people walked off their jobs to demand an 8 hour work day. Imagine having to protest to get the 8 hour workday we take for granted.   It was referred to as the Chicago Haymarket protests.

This one protest set off a series of protests  the United Kingdom and parts of Europe causing governments to recognize this date officially as the International Workers day but the United States was reluctant to do this.  Over time, especially in many of the communist countries, this day evoked parades, speeches, and other activities to celebrate the worker.

One reason the United States refused to acknowledge this particular day, had to do with its association to the socialist and communist parties.  In 1958, Eisenhower signed a resolution making May first "Loyalty Day".  A day where Americans affirmed their loyalty to this country.  The resolution was a way of distancing the day from the communist celebration.  Remember, this is just after the communist scare with all those public trials, and in the middle of the cold war. A second reason was that the United States already had a day to celebrate the worker.  Every September, we celebrate labor day which was established in 1887.

Long before the Chicago Haymarket protests, May first celebrated something entirely different.  Originally, people celebrated the start of summer with various celebrations including maypoles and flower crowns.  Celebrations like this could be found in many different civilizations but this is actually more of a northern hemisphere celebration because winter is starting in the southern hemisphere.

Another tradition associated with May day began in the 19th century before continuing into the 20th century.  People picked flowers and placed in a basket with other goodies such as candies.  The basket was then placed on the doors of friends, lovers, and relatives.  This May Basket was sometimes used to express romantic interest while other times, it was simply a way of saying hi.

There is the story that two children placed a May basket on the door of the White House for Grace Coolidge to find. Later on, she had the children tracked down and she shared flowers she picked with them.  By the mid to late 1960's the tradition had pretty much faded away.

So now, I'm not sure who still celebrates this.  When I was a child, it was just a fun day out of the classroom.  We didn't know the history of it.  We just did it.  Let me know what you think, I'd love to hear.

Email ThisBlogThis!Share to TwitterShare to FacebookShare to Pinterest
Labels: May Day