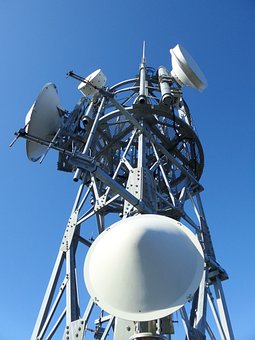 I recently spoke with the guys from the internet provider.  One showed me a picture of the microwave tower up in the hills between here and Scammon Bay.  The sucker was covered in thick ice so both the cell phone and internet signals are compromised and is up and down according to luck.

This is the first time in the whole 12 years I've lived here that anything like this has happened.  The ice covering is due to the temperatures hovering around zero.  For anyone who lives in a warm climate, this means the snow tends to be rather wet so it clings to things much better.

Add into the mixture the fact that the snow often starts melting when temperatures rise during the day and then freeze turning to solid ice at night.  This ice can be hard and slick.  I've seen snow turn into such a slippery ice that ATV's couldn't stay on it.

Anyway, the ice built up layer after layer over time.  In addition, the wind thrust particles of snow and ice onto the layers already on there until finally, the signals were effected.  Since March 7, 2018, both cell and internet have had issues.  They've been  up and down and last we checked, the home internet was still mostly down.

The school installed a military grade satellite dish loaned to them by the internet company because its the time of the year the state is demanding we test students.  We'd tried the dish before but we had to put it up every morning and take it down every evening.  Unfortunately, it often took too long to get the signal right or they couldn't find the signal.

So, the other day, the provider sent out a couple of techs to put the dish on the back porch so it was secured and could not be run over or stolen.  So now the school has a signal.  Well, most of the time.  It means I have internet but it's not always swift and not always great.

As far as the cell phone, there is still a major issue in that the signal can suddenly disappear while people are in the middle of a conversation or it disappears for several hours only to reappear long enough to tease you before disappearing.

Yes, we call in on a regular basis but customer service is often not well acquainted with how things work because I've been told that only my cell service is being effect but my internet should be up and working or the ticket number doesn't apply to the situation or any number of other reasons.

The cell phone and internet provider finally sent out an email stating there is a problem but they have to wait until the ice melts. Based on the photo's it may be another 2 to 3 weeks before the ice is melted enough for the services to resume.  That is assuming, the tower did not get damaged as chunks of ice slid off.

If I miss a day or two, it is because of the lack of constant internet.  I am trying to stay ahead but its hard when I cannot do it at home.  Let me know what you think.
Posted by Lee MacArthur at 4:00 AM

Email ThisBlogThis!Share to TwitterShare to FacebookShare to Pinterest
Labels: Still a Popsicle!