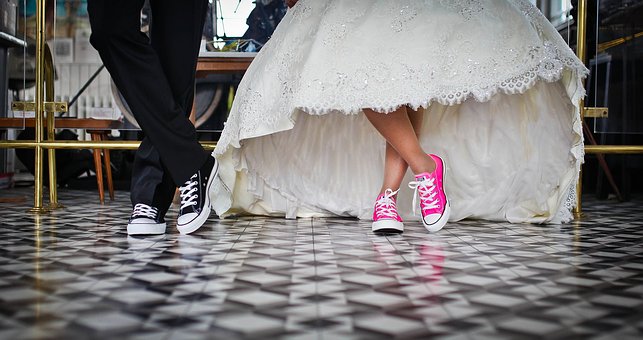 Shoes come in all sizes, colors, and types.  There are sneakers, running, high heels, wedges, golf, track, glittery, stripped, leather, canvas, and so many more choices.  The one thing they have in common is each pair of shoes has a left and a right.

This has not always been the case and it certainly is only a recent development.  Up until 1818, all shoes were made the exact same with no distinction between left and right.  None and they were not that comfortable because they didn't have any curve.  The same form could be used to create either shoe since it was a straight form.  At this time, all shoes came in two widths for every size.  The original slim size which was the same size as the form or the stout or wide which required a bit extra leather on it to provide the extra width.

In 1818, someone made the first right shoe in Philadelphia.  Unfortunately, they didn't take off fully at this point.  In addition, most shoes were made using the same tools as those used in Ancient Egypt.  It wasn't until 1845 that the first changes occurred when the first machine for shoe making came into use.  It replaced the hammer and lapstone used to pound the leather.  By pounding the leather, the fibers become more dense resulting in longer wear.

In 1858, another machine designed to show the upper leather to the soles of shoes.  This was a huge step towards mechanization, especially as many shoemakers were called up to fight in the Civil War.  McKay bought the patent for this machine and as a way of convincing others to use the machines, he made an agreement with many factories who previously turned him down.  He would place the machine in their factories and they would pay him a small amount of the money saved due to increased production.  McKay created a royalty stamp which noted the payment made on shoes made with this machine.

This was actually an important development for two reasons.  First it allowed companies to obtain machines without a huge outlay so it was much easier to stay up with all the latest fashion changes in shoes and second, he created interchangeable parts so the machines would never be down.

In 1875, another machine built by the son of the founder of the Goodyear rubber company, expanded mechanization of shoes.  This machine made Welt and Turn shoes, a different type of shoe making the production more efficient.  Welt and Turn shoes have been around since the 14th century but is still around.

Imagine in the space of less than a century, shoes started having both a left and right and their production became mechanized.  Let me know what you think, I'd love to hear.  Have a great day.

Email ThisBlogThis!Share to TwitterShare to FacebookShare to Pinterest
Labels: Shoes