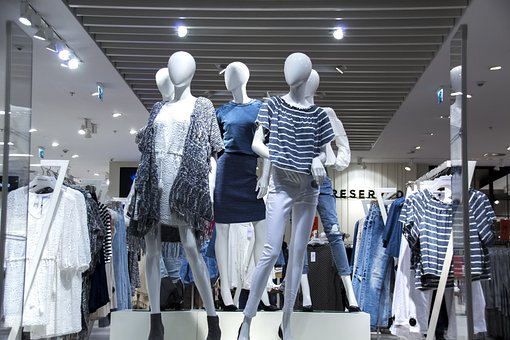 We've all seen them in stores.  They wear the latest fashions designed to catch our eyes and make us want to buy the product.  More often, we see them sitting in the window as we walk by and it draws us into the stores.  They brings in people.

Mannequins as we know them have not been around for more than about 150 years.  What caused mannequins to change and evolve was the development of the plate glass windows.

Up until the mid 19th century, stores did not have large plate glass windows.  Most stores had stacks upon stacks of clothing.  If anything resembling a mannequin existed, it was often found in tailor or dressmaker's stores to advertise their work.

The first few mannequins dating from the mid to late 1700's were made out of wicker (yes the same stuff your garden furniture is made of) or wire. Neither was particularly outstanding and were often made to order.  Around 1850, the first glass windows began showing up in Paris before spreading out across the continent to America.  By around 1900's mannequins as we know them began showing up.

The original ones were about 300 pounds made of wood, wax and iron.  They came out around the 1900 and the female ones had the perfect corseted shape but were totally stiff.  These came in only three poses.  Many people were upset with the mannequins so new laws were passed requiring store owners to cover store windows when changing outfits.

The basic shape changed about every ten years and reflected the change in society and fashion.  There were even changes as materials changed to make the mannequin more flexible and life like.  During the 1920's mannequins were more androgynous to reflect the flapper look while in the 1930's they became a bit softer and more feminine.

Somewhere in the 1930's or so, a mannequin maker created a female mannequin who went everywhere with him. Time did a spread on her and Tiffany's even provided jewelry for her to wear.  She attended social events and was featured in social columns of newspapers.  Her fame ended when she fell off a chair and broke.

In the 1940's the male mannequins looked more like soldiers with their bearing and looks but the women shrank 2 inches to use less materials so more were available for the war effort.  Then in the 1950's women were again at the normal height with the usual curves while the men looked more like the dad in "Father Knows Best".

Come the 1960's the female mannequin resembled twiggy with her boyish figure while the 1970's had female mannequins looking more feminine.  About the 1970's or 1980's Asian and African American mannequins started hitting the stores and were more accepted.  By the 1990's there were even petite, pregnant and teen age mannequins.

What is so interesting about the evolution of mannequins is that they mirror accepted societal norms for women especially through time since 1900.  When women were expected to be skinny, the mannequins were skinny.  If they were expected to have curves, mannequins had curves.  Its almost a mirrored reflection.

Let me know what you think, I'd love to hear.  Have a great day.
Posted by Lee MacArthur at 5:04 PM

Email ThisBlogThis!Share to TwitterShare to FacebookShare to Pinterest
Labels: Mannequins