The History of Doughnuts. 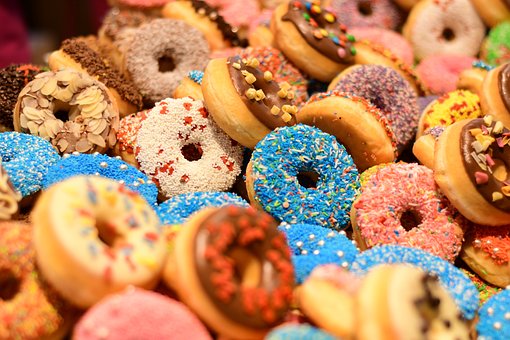 Most people love doughnuts.  They might prefer the more traditional flavors or they might go after some of the wilder flavors.  I tend to prefer malasadas which are Portuguese Sweet Doughnuts.

Have you ever wondered where they came from?  What is their history or are you like most people who just accept them because they've always been around.

Well some from of doughnuts have been around since the beginning of time but its more recent history is important.  Allegedly, doughnuts first made an appearance in the United States way back when the Dutch came over with their" Olykoeks or Oily Cakes".

A few hundred years later in the mid 19th century, Elizabeth Gregory used various spices from her son's cargo along with lemon zest in the deep fried dough. Supposedly, she places hazelnuts or walnuts in the center where the dough may not have cooked as well thus leading to the name doughnuts.

In an interview, Captain Gregory claims to have used a round tin pepper lid to cut the center out and states it was the first time ever that people had seen the hole in the doughnut.  Unfortunately, doughnuts did not become popular until the first World War when women served them to soldiers in the trenches.  This provided a taste of home and soldiers who returned from the war, yearned for a taste of them in their daily lives.

In 1920, the first doughnut making machine made an appearance in New York City when a Russian immigrant began selling them in his bakery.  The machine began the idea of throwing a ring of dough into the oil to cook, so the finished product has the hole in the center with no waste.  Over time, machines have been refined and the taste grew.

In 1931, the New York Times Newspaper let people know where to get doughnuts on Broadway.  The article described the making in poetic detail so people wanted to buy the product.  By then, the Russian immigrant was making $25 million a year by mass production and delivery to stores around the country.   Some of the early doughnuts were sold with a feel good saying because of the depression.

Come 1937, three young men living in North Carolina borrowed the ingredients began producing and marketing doughnuts under the world famous Krispy Kreme label.   The desire for the product expanded and people drove from all around to enjoy the doughnuts.  Again, World War II created more of a market for doughnuts as young ladies provided them for soldiers at various canteens and it appeared in one of Irving Berlin's musicals.

Over time, Krispy Kreme grew and other companies such as Dunkin Donuts met the country's demand for doughnuts.  The consumption continues to grow as people have them for breakfast, celebrations, etc.  I grew up only knowing about Dunkin Donuts.  I have my first Krispy Kreme back about 15 years ago.

Let me know what you think, I'd love to hear. Have a great day.

Note:  I am still waiting for my internet to start up at home.  They are extremely slow and they had a changeover in the billing system so my account didn't flip over and I had to start the whole process again.

Posted by Lee MacArthur at 3:23 PM

Email ThisBlogThis!Share to TwitterShare to FacebookShare to Pinterest
Labels: Donuts