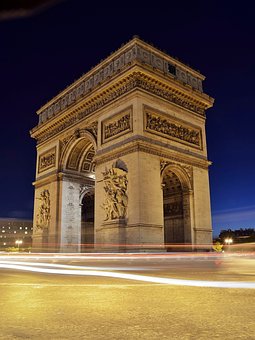 I am now just getting around to planning my Christmas holidays.  I will visit relatives for a few days including Christmas day.  I checked out the price of flying to Maui for the rest of my holidays but the price was a bit expensive and the first class tickets were sold out.

I've always wanted to visit Paris since I took my first French language class at 13.  Paris always seemed to be so mysterious.  A city filled with romance and history.

I remember hearing the Parisians packed up and moved all valuable paintings, statues, and sculptures to places in the countryside, away from the city.  By the time the Nazi's moved in, there was not much there.  After the Nazi's took over, they filled it with work stolen from the Jewish population.  At the end of the war, everything came back in good condition.

Then there is the Eiffel Tower, built as the main attraction for the 1889 World's Fair.  It took about two years to build the wrought iron structure which many Parisians hated.  Although it was supposed to only remain for 20 years, its use as a wireless telegraph transmitter cancelled its destruction. It is still used to transmit radio and television signals all over the city and further.

One must not forget the Arc de Triomphe built to remember the French who died, particularly in the Napoleonic Wars.  When I took French, they never told us its history, only noted it as one of the most famous monuments in Paris.  The Notre Dame Cathedral, the Left Bank, and so many other places.

I want to stroll down the Champs-Elysees some evening to enjoy the lights.  Buy bread in bakeries to experience the original croissants.  Buy a pastry, and enjoy a picnic out in one of the parks.  There is so much to do and honestly 5 days is not going to be enough for just one visit.

Unfortunately, I am going to have to postpone the trip.  My father had a minor stroke this past weekend.  He has been released but they said he can never drive again due to him possibly having a another stroke while driving.  That is hard for him because driving is his sign of independence.  Since he can't drive, I'll spend the whole time visiting, driving him to places like Trader Joe's the market, etc.

I may try to go to Paris next winter.  It will be there another in the future which gives it me time to plan and find a place to stay.  I planned to stop in Iceland on the way back but so many places are already selling out and its not even September.  Maybe I can buy my tickets in March and reserve my rooms then so I'll be prepared.

Let me know what you think.  I'd love to hear from people on their thoughts and suggestions for visiting Paris.
Posted by Lee MacArthur at 4:00 AM

Email ThisBlogThis!Share to TwitterShare to FacebookShare to Pinterest
Labels: Dreams.