Pictures and Video of Tundra Fest

I recorded 20  seconds of the first dance of Tundra Fest last night.  I am not sure what it is about because no one has explained it to me but I enjoy dancing it.  As you can see, the men are in the front kneeling, the women standing behind them and in the very back, seated on a bench are the drummers. 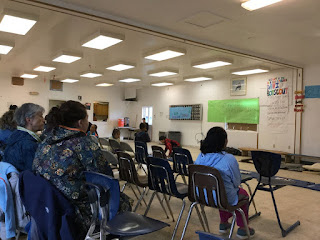 This photo was taken while everyone waited for the start of the festival.  The doors opened at 6:30 so everyone could get there. Dancing was supposed to begin at 7 but it took a bit longer.

Traditionally the hosting village goes first the first night, in the middle the second night and last the third night.

The really tall poster just next to the room divider is a tribute to an elder who passed away this past spring.  He was in his late 90's or early 100's.  No one is sure.  We do know, things changed tremendously since he was born. 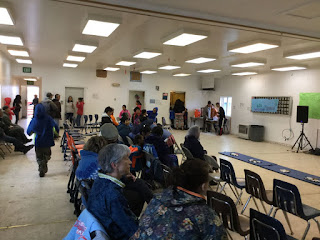 People are still setting up and waiting for dancing to begin.  If you look carefully at the right side of the picture, you will see blue mats laid out across the floor with masculine dance fans.

That is where the men kneel.  Behind the mats is a speaker for the microphone so everyone can hear all announcements.  In the back right corner is a snack shop with candy, soda, some food, and jello.  Jello with cool whip is a village favorite.

When Tundra Fest is not being held here, it doubles as a church, bingo hall, and everything else as needed. 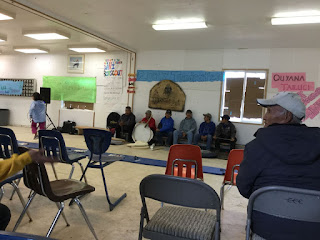 In this picture you can see the men gathering to drum for the first group.  Many of these men also come to the school to drum for the native dance class so students know the dances.

The village feels it is extremely important to keep the culture alive by teaching cultural ways to students.  The high school has an actual dance class for students.

The drum is a round wooden frame with a man-made material stretched over it.  This material has replaced the animal skins they used in the past. 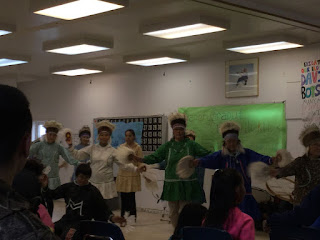 This is a still shot of the first dance.  The women are wearing kuspuks which is the standard native top.  Some have skirts so they are worn more like dresses over long pants while those without a skirt function as a shirt.  Both men and women wear the kuspuk.  The spelling of the word varies according to the group.

You can also tell what region a person is from based on how the kuspuk is put together and decorated.  Women may or may not wear a headdress.  Sometimes the headdress is a family heirloom worn by generation after generation. 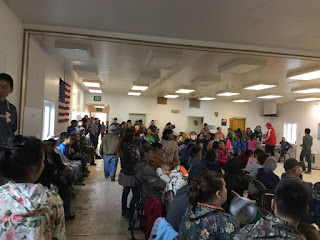 The last photo is taken of the crowd between the first and second dance groups.  It was pretty well attended but there are usually more people the second night.

This building started much smaller but a few years ago, they built an extension so it could be used instead of the the building next to it.  The original building developed black mold all through it so they chose to discontinue using it.

The festival will continue for two more days with games for kids and adults.  Yesterday, there was a cake walk for the village.
I hope you enjoy this peak into a fall celebration held in Alaska.  Let me know what you think.  Have a great weekend.
Posted by Lee MacArthur at 1:05 PM