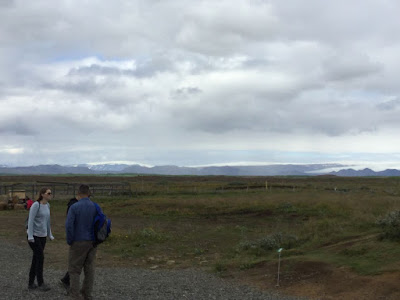 The third part of the circle tour had us stopping at the Gullfoss falls, we had a great view of the second largest glacier in Iceland.

It is quite impressive, the way it spreads across the horizon.  A white mass gently caressing the hills in the back ground.

The first Icelandic environmentalist is intimately associated with Gullfoss falls.  In the early 20th century, an English company wanted to lease the land and the falls so they could produce electricity from a farmer. 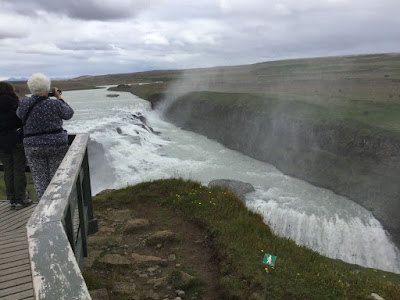 The daughter, Sigridur, opposed the move so she made her way to Reykjavik at a time with no roads or bridges to protest the contract.

She was unable to get help so she returned home.  Fortunately, the English company fell behind in lease payments and her father voided the contract.

For her courageous move, Iceland considers her the countries first environmentalist.

Gullfoss is actually composed of two different waterfalls falling from one to another. 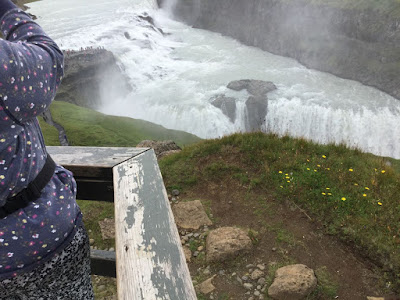 The falls are so impressive as they tumble down from left to right, then change direction going from right to left before plunging down into a channel carved out of rock.

On a bright sunny day, it is possible to see a rainbow in the mist of water drops thrown up from the force of the plunging waters.

The government owns the falls so they've set up two viewing stands, one on the upper  level and one on the lower level. 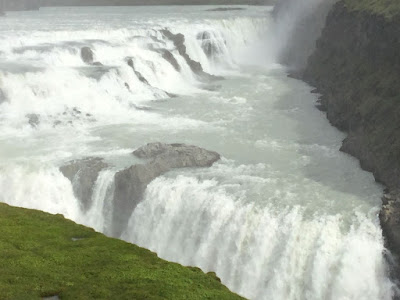 I took pictures from both levels.  The water as it rushes over the rocks, almost appears alive as you stand there watching.

Our tour guide shared a wonderful story with us.  A warrior fell in love with a woman whose previous two husbands died after slapping her.  His friends warned him about her but he ignored their advice and married her anyway.

She was not a great wife.  She wasn't taking proper care of things so part way through the winter, they started running out of food.  Rather than admit things, she stole from others and served it to her husband.  When he found out he was serving food to his neighbors that was originally theirs, he got upset and slapped her face.  She vowed revenge. 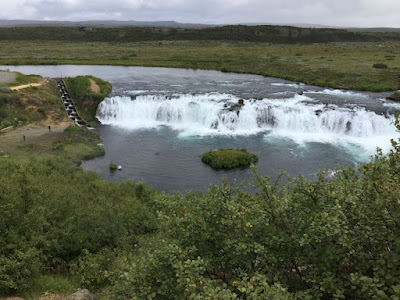 Several years later, people tried to take over his land.  He was doing well repulsing the invaders when the string on his bow broke.

He begged her for a strand of hair to use on his bow, she refused.  She said she'd told him she'd get revenge and this was when she chose to do it.

He was unable to defend himself and was killed.  The story ends here.  The tour guide stated many people believe the legends as true. 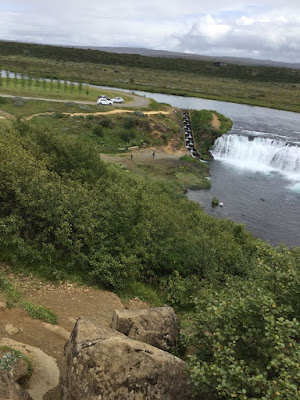 This picture to the right and the above are a different waterfall.  They stopped here because of the Salmon ladder to the left of the falls.

The Salmon ladder aka fish ladder is built to help salmon move up steam past water falls, dams, and other natural obstructions which could interfere with salmon migration.

According to the tour guide, people in Iceland were so poor before World War II, they lived in caves because they could not afford a house.  Imagine living your whole life in caves.

At one point on the tour, we passed an area filled with caves.  This is when she shared the story.  Later on the trip, she explained why sheep wandered the countryside free.  Every spring, the sheep are let loose to fatten up and they are gathered up in the fall where they are run through sorting shoots.  Sheep are branded so its easy to tell who owns each sheep. 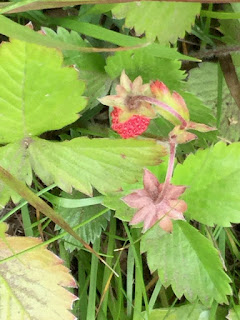 Whenever we made a stop, I always looked for plants I knew so at the second waterfall, I spotted this small wild strawberry plant with strawberry.

I showed her the plant and she took a picture of it because wild strawberries are not that common.  Wild blueberries are more easily found.

I did not pick the strawberry because it was not quite ripe and I preferred to leave it for the animals to enjoy.  This was off to the side of the path, near the viewing stand.

Originally, thirty percent of the country was forested but many of the trees were cut down by early settlers to provide heat and grazing area for their livestock.  Today, only 1.5 % of the forested areas are left. 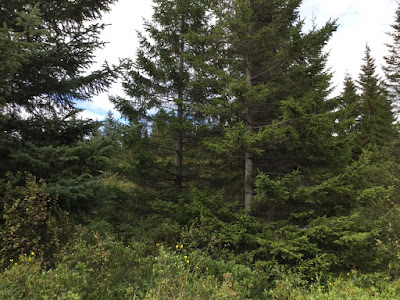 This fact is important because in 1911, a citizen left 45 hectares of forest to the Icelandic Youth Association.

They have maintained it to the point it is considered one of the most beautiful preserves around today.

One last story shared with the tour group is so interesting.  It is about the origin of elves based on Icelandic folk lore.

Adam and Eve had lots of children.  One day, Eve received word God planned to come visit.  She tried to get all her children cleaned up but she didn't have enough time so she hid the children she'd not gotten ready for God's visit.  God arrived.  He looked at all her children before asking if they were all out.  She said "Yes." but God knew she lied so he said "The children who are hidden will remain hidden forever"  Those hidden children are Elves.

By the time you read this, I'll be in Finland for a conference.  I hope to share pictures of my visit to Helsinki.  Let me know what you think.  Enjoy.

Email ThisBlogThis!Share to TwitterShare to FacebookShare to Pinterest
Labels: and Elves., Legends, Waterfalls