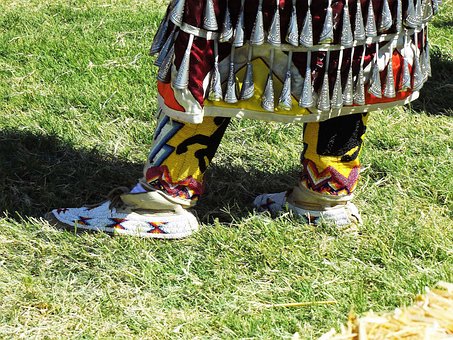 Tonight marks the beginning of a wonderful dance festival, held here in the village every fall.  Several villages come for three days of games and dance.

Native dance in Alaska varies some from village to village but it uses only a drum and the human voice.  Some songs have been around a while while others are quite new.

Unfortunately, music and dance was banned because it was not seen as properly religious.  In many communities, the songs and dances went underground while in others they disappeared.

Most dancers in this area use hand fans as part of the cultural dance.  I will have pictures tomorrow of the fans.  The women use fans made of woven grass and fur while the men have ones made of wood and feathers.  If a person does not have fans, they usually wear gloves.  In most of the communities I've lived in, the men kneel in the front while the women stand in one or more rows behind them.

On the island of Diomede, women sit in a row of chairs as they dance, rather than standing but the position of the musicians varies even more.  In my area, the musicians sit facing the dancers with their backs to the audience.  In other places such as Diomede, musicians are behind the dancers.

Most songs have a story such as going out to pick berries, make agutaq (local ice cream) and eat it.  Other songs might celebrate basketball, karate, hunting, fishing, chewing bubble gum or taking care of a baby.  I  know a guy who when he dances the taking care of the baby song, he is so energetic he would give the baby whiplash in real life.

One song, I thought was about taking care of a baby but it turned out to be about cutting and carrying meat.  I just follow others when dancing and I do not worry about the meaning.  Most songs have a certain pattern they follow, much like any song with the chorus and various verses except the verses are often repeated within the overall pattern.

I hope to record a little bit of video tonight of the dancing and share it with everyone tomorrow.  I hope you have a good evening and see you tomorrow.
Posted by Lee MacArthur at 4:51 PM