The plane left Rekyjavik at about 4 in the afternoon but not long after we took off, we had to return to the airport due to a mechanical issue.

As soon as we hit the ground, we were issued a voucher for dinner while we waited to find out if we were going to leave or have to spend the night.


We hear around 7 PM, we were due to leave at 10 PM because they found an airplane but they had to wait till it came in from elsewhere in Europe.

So around 10 PM, we loaded up and took off.  Unfortunately, this landed me at the airport at 4:30 in the morning when nothing is open.  No information, no currency exchange.  Nothing.

I was lucky in that someone sent me information on where to pick up the airport bus and it accepted credit cards.  I made it to the hotel around 6:30, got up to the room, popped down to enjoy breakfast before crashing in bed.
I think I slept for 5 hours straight.  I wanted to stay in bed but knew I needed to get up and move around or I'd be awake all night.

I took off.  I didn't get a chance to ask the front desk for directions but they were extremely busy, so I took off to explore.  As I walked along, I passed Finlandia Hall, a multipurpose venue.  It was really majestic.

I passed a few other tourist attractions but by this time it was beginning to rain and I was heading off to find some place indoors so I'd stay dry.

I ducked into a shopping center with a nice little cafe, a bank, a pop radio station, a eye glasses with eye doctor shop, and several other places.  I sat down for a while, just waiting for the rain to stop.

After leaving the shopping center I stumbled across a supermarket and the post office.  I popped into the supermarket to pick up some fruit, bread, cheese, yogurt, and chocolate so I'd have snacks  available to eat later on.  The building also had a Starbucks but I did not go into that.

Since I've never shopped in Finland before, I didn't realize I was supposed to weigh the fruit and get a sticker on it before I checked out.  The clerk was very understanding when she discovered I was a visitor.  She popped out, took care of it but next time, I know what to do.

After leaving the grocery store, I found the central train station in the center of Helsinki.  It appears most buses, trams, and trains all swing through the area allowing people to make connections.


As I continued to stroll around town, it began to sprinkle.  A soft drizzle doesn't bother me but it wasn't long before it rained harder and harder.

Eventually, I found an overhang to hide under before I became sopping wet.  I stopped at wet but not quite dripping.

As soon as I got back to the room, I hit the showers and took a nice hot, hot, hot shower so I wouldn't get sick. 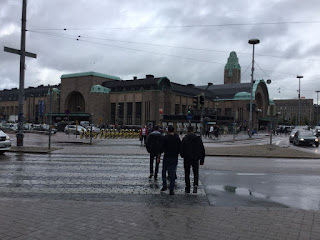 If you look carefully, you'll see the wet streets. This was between showers.  I think its the central railroad building.

The next day, I moved hotels.  I could have taken a bus, or taxi but I decided to walk to the new hotel.  I'm here to participate in a conference so I moved into the conference hotel.

It was only 2 miles between hotels but the map didn't show all the hills and flat areas, and the map was not totally clear so I missed a turn and went further than I should have.