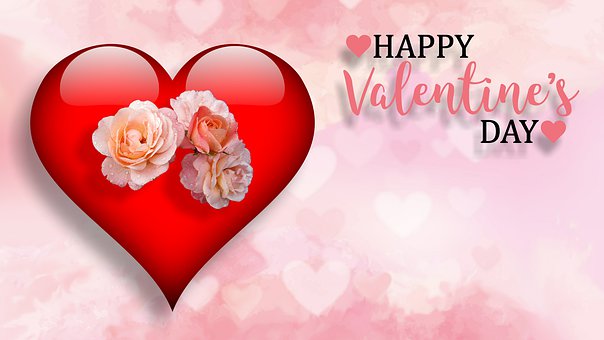 Today is February 14th, the day when people, especially children, give valentines cards to each other.  When I was a child, I hoped against hope I would be one of those children who got a pile but it was never to be.

1.  One theory regarding the origin of Valentines Day, is that one of the Roman emperors did not want his men to marry during war time but Bishop Valentine disregarded his rules and married people anyway.  For this he was killed.

2.  In Victorian times, they did not sign valentines cards because it was considered bad luck.

3. According to the latest retail statistics, it is not only people who give gifts to each other on this day, three percent of pet owners give their presents to their animals.

4.  It is estimated that around one billion valentines cards are exchanged each year, making it the second largest time of year for sending cards.

5. In Finland, they celebrate Friends day so you remember your friends rather than your loved ones.

6. The X representing a kiss comes from Medieval times when illiterate people signed an X in front of witnesses. The X was then kissed to show their sincerity.

7. The saying "To wear your heart on your sleeve" comes from the middle ages when men and women drew the name of their valentine from a bowl.  They'd then pin the name to their sleeve for one week so all would see.

10. Over half the Valentine's day cards sold are sold in the six days prior to the holiday.

11. Red roses are considered the flower of love because the color red is the color of romance.  185 million roses are sold last year to celebrate the day.

12. Teachers receive the most valentine cards each year.

13. There are an average of 220 million marriage proposals made on this one day.

14.  Each Valentine's Day, the Italian city of Verona receive over 1000 letters addressed to Juliette of the famous pair Romeo and Juliette from Shakespeare's play.

15.  The most popular gift on this day are flowers.

16.  The first valentine is alleged to have been given by the Duke of Orleans to his wife with a poem in the 15th century.

I hope you enjoyed these 16 odd facts about Valentine's day.
Posted by Lee MacArthur at 4:00 AM