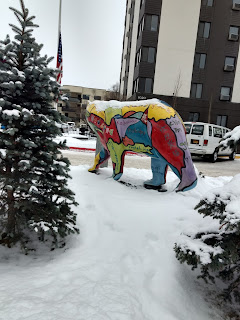 I have just spent the past few days in Anchorage, attending an Educational Technology conference.  I presented  on three different topics and think they went well.

The thing about Anchorage is that every time I go in, I find different things to see. There is a sign posted to the front door that says to beware the moose if you see any.  Yes its a city but that doesn't stop the animals from coming in to check things out.

I think this may be the only state where opening the front door and coming nose to nose with a moose is a good reason for being late to school.

As you can, bears roam downtown Anchorage. These are psychedelically colored and much friendlier than the normal bear. 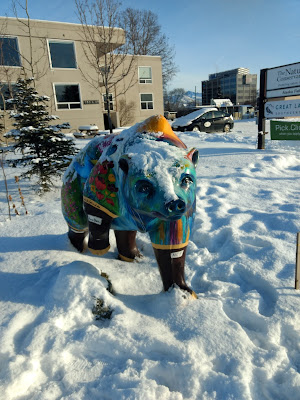 The above bear is found over near the Inlet Tower.  Point of interest.  The Inlet Tower survived the 1964 earthquake that wrecked the rest of the town.

It is amazing it survived the 9.2 rumble of the earth in a time where tall buildings were not built to modern earthquake standards.  I've stayed there and its a bit outdated but its prices are quite reasonable.

The bear to the right is Alaskan from its nose to its tail.  Notice its outfitted with AK Tough boots.  This is a play on the fact that people up here wear the tough booths during spring, summer, and parts of fall.

I own a pair that are insulated so I can wear them longer, even through the early stages of winter. 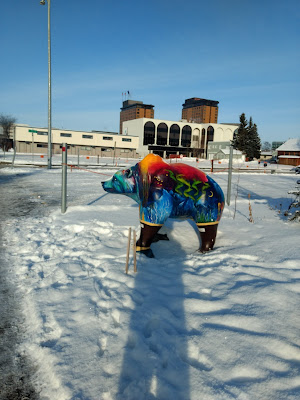 This particular bear leaves its mark on a piece of land down the street from Benihaha.  It is surrounded by a bunch of parking lots since it is almost in the center of downtown.

Both bears have character and personality that shines through its being stationary. I know both are sculptures but they still make me laugh since they look as if they are frozen in time like a photograph.

These bears are so much friendlier than most bears in that a child could climb on them without fear of being attacked.

I love this time of year when I visit Anchorage and find something delightfully new and joyful.  I am going to miss the snow sculptures artists are preparing for the Fur Rondy.

Don't worry, I"ll tell you more about the opening events of the Fur Rondy when I get closer to that date.

I hope you enjoyed seeing these two roaming bears.  I adore them.  Let me know what you think, I'd love to hear.
Posted by Lee MacArthur at 4:00 AM