The History of Instant Coffee. 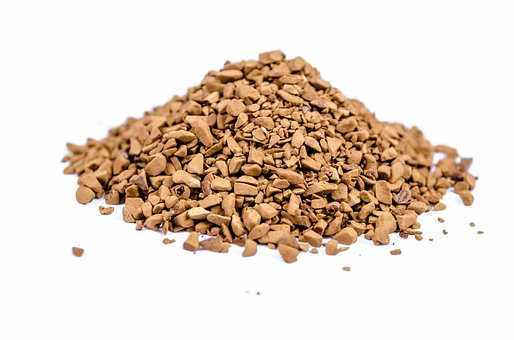 When we think of instant drinks, most people think of coffee but not me because I drink tea.  My parents drink it and drank instant most of time when I grew up.

Instant coffee has been around for a lot longer than I would have guessed.  The first known as a coffee compound was given a patent by the British Government in 1771.  It wasn't until 1851 that the first American instant coffee was created.

These cakes of instant coffee became part of the government issued rations during the Civil War. It wasn't until a New Zealand scientist created a hot dry air process which produced an instant or soluble coffee more familiar to us in 1890 but it was not the most successful method. This was developed in 1901 by a Japanese American chemist from Chicago who patented it in 1903.  Another American entrepreneur worked on his own version and marketed the first commercial instant coffee in 1910 under the name "Red E Coffee".  Again the Americans bought lots of this coffee to include in ration packs during World War I. Soldiers referred to it as a "Cup of George" named after the man who marketed the first commercial brand.

The big push to instant coffee came when Nestles was stuck with a ton of coffee beans in Brazil due to the stock market crash of 1929.  Nestles researched the problem using a variety of methods before hitting upon the best way to produce a flavorful coffee which dissolved easily in water.  In 1937, they struck gold when they discovered they needed to dry equal parts of coffee extract with soluble carbohydrates.  They marketed the new product in 1938 under the name of Nescafe in Switzerland.

Again, the coffee gained popularity during World War II because the government purchased it from Nestles and packed it in with rations given to the soldiers. The United States Government purchased over one million cases of Nescafe, the entire amount produced by the company.  All through this time, Nestles continued working on producing a better instant coffee and by 1954 they'd managed to produce a coffee made of only coffee with no soluble carbohydrates.  Come the 1960's, companies discovered freeze drying created a great tasting coffee with better color and flavor.

Now for some interesting facts about coffee in general:

1. Both the New York Stock Exchange and Lloyd's of London began as coffee houses.

2. Turkish bridegrooms must promise to always provide their wives with coffee.  If they do not, it is grounds for divorce.

3.  The first European coffee was sold as a medical remedy in pharmacies as early as 1615.

5. Pope Vincent III heard people claim coffee to be the devil's drink, so he tried it and liked it so much, he baptized it.

6. Coffee is the second most traded product in the world after oil.

7. There are 53 countries who grow coffee and are located around the equator area.

8. The average coffee tree produces a kilogram in a year.  The fruit is red when picked but does not turn brown until they are roasted.

10. There is a claim that people used to drink coffee out of saucers because the drink cooled faster that way.