Skateboarding and the 2020 Olympics 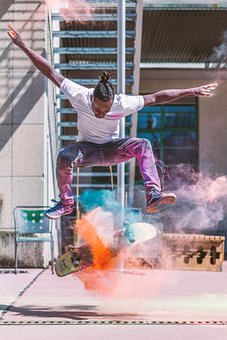 Street type skating generally refers to skating in the streets, parking lots, or any public place. This is the most popular type of skating.  Park skateboarding is when obstacles are installed in a limited area for people to skate in.  Some of the obstacles include pyramids, banks, ledges, and boxes scattered around.  Many of the tricks are the same as done in the street but the parks substitute for the street and is often safer.

Why would the Olympics include skateboarding as one of the official sports?  They are looking to attract more of the younger crowd. The crowd who are likely to be out on the street performing their own ollies, bowls, riding ledges, and kick flipping and who might see themselves performing side by side with the Olympians.

I've watched skateboarding in a park near the library when I've visited my siblings but how would these tricks be scored at the Olympics?  According to an article, judges will look at speed, height, and combination of moves along with the composition of the moves when they judge skateboarding because it is a free performance competition.

So when the competition begins, they will be scored on originality, composition, style, and consistency but in street skating they add in  overall board control  while in park skating they consider  height and speed of air tricks.

Makes you wonder who will make the first United States skateboarding team in 2020 and what it will take.  There is already a lot of talk about Shaun White medal winning snowboarder being on the team but I have not found the process by which skateboarders will be selected to compete.  I did discover that skateboarders are under the folds of the International Federation of Roller Sports but nothing more.

It sounds like this sport is still so new they have not had time to figure out how the skateboarders will qualify for the United States Team.  I know there are tons of talented skateboarders who prowl the streets and parks but will they have the chance to qualify?  I hope so but I don't know.

Email ThisBlogThis!Share to TwitterShare to FacebookShare to Pinterest
Labels: Skateboarding and the 2020 Olympics