A Brief History of Desserts. 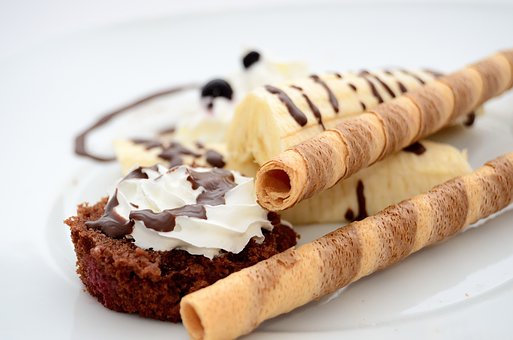 When I was growing up, we seldom had anything for dessert to end a meal.  Usually, we finished eating the main meal and we were off to do homework or headed out to play in the neighborhood.

If we had dessert it was because it was a holiday such as Thanksgiving or it was someone's birthday.  If mom made cake, it came out of a box and so did the frosting.

My favorite - A German Chocolate cake with coconut pecan frosting.  Once I got older, I fell in love with carrot cakes or apple spice cakes because they had more substance to them.  They were more filling and I chose smaller pieces.  I recently began wondering when desserts became a normal part of the meal.

Apparently, the word dessert is derived from the French word desservir which means cleaning the table.  Back in the 17th century, when entertaining could last all night, cooks often prepared sweets or finishers in advance served at the end so people were filled to the brim before they left.

Sweets have been around for a long time but appeared originally in the form of nuts or fruit rolled in honey. This is considered the first candy.  If you look at the Chinese, you'll find they invented a form of ice cream that was actually a flavored ice.  It wasn't until it reached Italy that adjustments were made so the flavored ice became a sorbet. No one is sure when it became the ice cream we know today.

One of the contributions to the development of modern desserts came when sugar began to be manufactured in the middle ages but it was still extremely expensive so only the rich could afford. The first printed recipe for apple pie appeared in 1381.  The original gingerbread appeared around 1400 but it was made by soaking bread crumbs in spices and honey.

By 1600, Pralines made an appearance in France at the tables of nobility while in 1700 the Eclair began its evolutionary journey to the form we know today.  By 1740, numerous cupcake recipes existed so they were quite popular, although they are making a reappearance in a big way today.

In the 19th century, the lemon meringue pie became popular although both lemon and meringue custards existed prior to that.  Its only really been since the 1500's that desserts have really developed.  Along the way, many meat based puddings were replaced by sweet versions.

I hope you enjoyed reading this brief history of desserts. In a couple days I'll look at a few specific desserts and their history.  Have a good day.
Posted by Lee MacArthur at 4:00 AM

Email ThisBlogThis!Share to TwitterShare to FacebookShare to Pinterest
Labels: Desserts