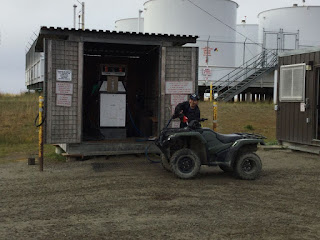 Friday, we walked out to the tundra for our last day of Seaweek.  We headed kind of north west out of the village.  Rather than go past the boats in the river, we took a right past the electrical plant, storage tanks, and the gas station.

I took a photo to show you the local gas station.  Yes the pump is encased in a small building that can be locked at night to keep people from trying to steal gas.

The attendant is in the building to the right of the pump.  The man in the photo works where I do.  He is awesome. 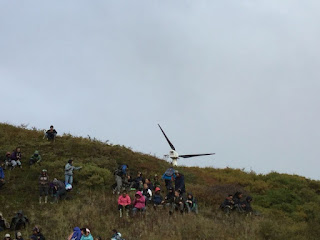 Since the line of students spread out quite a distance, those in the front stopped to let everyone else catch up.  In the background, at the top of the hill, you see one of the wind generators.

That means the dump is to the left maybe a quarter mile.  Coming back the kids actually took the route that had us walking down the road at the top of the hill that you do not see.

The kids had a great time resting.  The day was overcast and windy so it was a bit chilly. 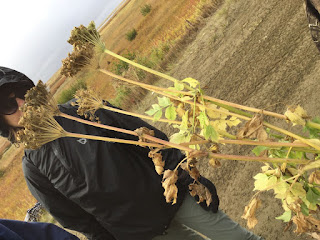 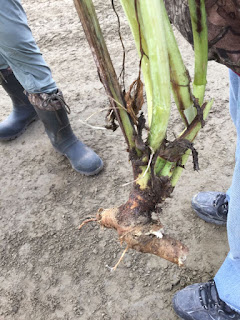 This picture is of the top of wild celery or what they call wild celery.  The one on the right shows the roots.  They collect the roots, dry them for winter and use them to make a medication for colds and flues. They make sure to wash the dirt off before drying.

On the way to the sod house, we passed an area with raspberry plants.  The plants are barely 6 inches tall but I couldn't find any berries or I would have picked some because they are considered a treat. 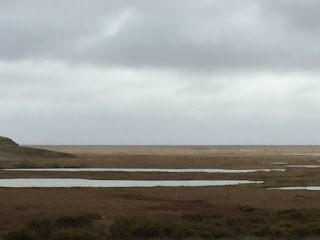 This picture was taken from the top of the sod house.  The village is off to the left, just out of sight.  The land is covered in tons of lakes so you cannot just hike out.

Long time ago, before missionaries, people out here built and lived in sod houses but not quite like the ones used on the great planes.

Small groups or families built their areas with a wooden structure that was covered with dirt and tundra plants.  Although there are no trees in the area, wood floats in and people gather it, especially after storms. 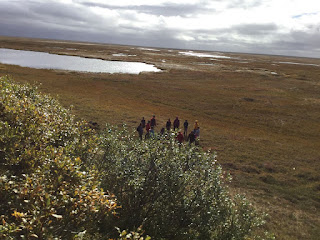 This photo was taken on the opposite side of the sod house.  I didn't get pictures of the areas starting to fall in because I was busy keeping an eye on a pair of teenagers in love.  The high grass and cold wind provided the perfect excuse to snuggle in a depression.

Some of the bushes you see are actually willow trees.  Nothing gets very tall on the tundra due to the temperatures underground and the wind which blows most of the time.

By the time this picture was taken, the sun was out and it was warming up.  The students below, played with a volleyball. 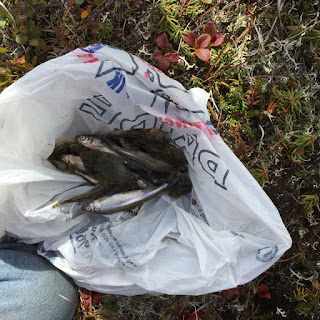 This is a bag of minnows, baby devil fish, and baby flounders.  One of the teachers took off to check his fish trap for dinner.  He said the minnow are fantastic when eaten raw and provide a quick snack.

I spent much of the afternoon picking cranberries or red berries as they are known locally.  I picked almost a quart bag full.  I gave it to a coworker who has a family but she'll bring me a treat when she uses them at home.

We headed back around 2 As soon as we were back and in classrooms, people brought around freshly made dessert with black berries.  Ohhh they were so good.

I hope you enjoyed a look at village life.  This is my 12th year here and I am still learning new things every year.  Have a great day and let me know what you think.
Posted by Lee MacArthur at 4:00 AM