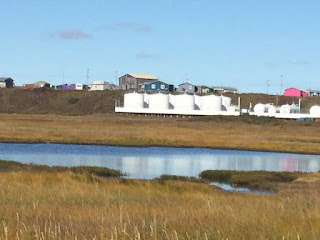 Yesterday, we began Sea Week.  Grades 10 to 12, headed down river towards Hooper Bay to camp out till Friday.  Grades 7 to 9 and the high school students who did not go camping are spending days out in the tundra within walking distance of the village, while elementary students do a variety of activities.

The middle school and high school students took off for the area out near one of the camps looking for mouse food.  We passed many of the landmarks in the village such as the tank farm where fuel is stored and where the only gas station is in town. 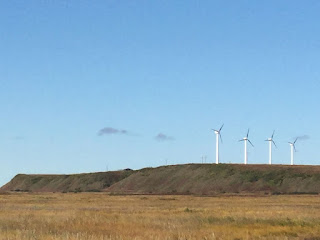 The fuel farm was built about 6 years ago in the area where the school held all cross country races.  The city built the facility over a summer.  I left in May it wasn't there and in August, it was.

If you follow the main road all the way down to the dump, you'll pass the four wind mills built a few years ago to keep electric prices from getting to high.  The electrical generators are fueled by petrol so the cost can be quite high.

You can tell this village from Hooper Bay easily by the number of windmills.  We have four while they have three. 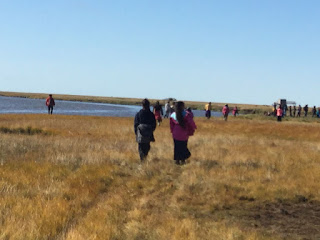 The day started out foggy but the fog burned off, leaving us with a beautifully warm day with few  clouds and a lovely breeze that kept the day from becoming too hot.

The four wheeler tracks go by the river where many of the boats are moored.  The area you see with that single person standing right next to the river is near where some people fish.

It was easier to follow the tracks than go across country because of all the creeks and small lakes we had to avoid.  Even creeks that look shallow can be filled with several feet of mud.  The mud clings if you slow down.  One young lady stopped to look around and got stuck in the mud. Another girl went over and helped her pull her boots out of the mud so she could take another step.  At one point they both fell into the mud.  Finally, one of the boys worked hard and got both of them out of their predicament. 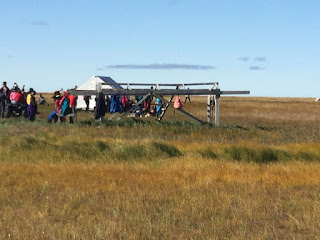 We paused at a camp site to learn more about collecting mouse food.  The item in front of the tent is a fish rack where people hang cut fish to dry them.  I know the family whose camp this is.
Most families have a fish camp and a berry camp which may or may not be the same.  This area is about 20 minutes away from the village.

Mice collect roots they store in their burrows for winter.  At this time of year, people walk the tundra looking for soft places and mouse holes. 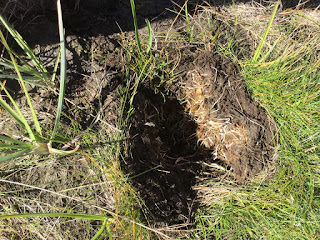 They search around the area, digging to find the roots.  You can see the hole in the picture filled with roots called "tear drops".  We ate some raw.  They look like small onion bulbs but do not taste oniony.

People do not take it all.  They always leave some for the mice so they can survive the winter.  These are really good in soup or lightly steamed in Eskimo Ice Cream.  This is a very popular vegetables. 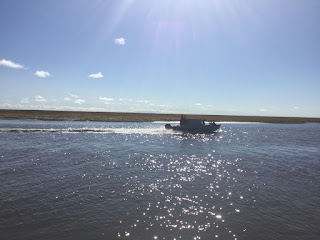 While out there, several boats filled with high school students and their chaperones heading out to camp out.

As they passed, we waved at them and they waved back.  I had an awesome time but several of the students complained they were bored.  They were the ones who sat on the ground, listening to music.  The ones who participated had a wonderful time and said they had so much fun.

Just before 3 PM, we herded the kids back towards school.  Another teacher and I brought up the rear with the stragglers who wanted to take as long as they could to get back.  At 3:30, we were just getting back to town.  I told them school was out and have a good day.

Tomorrow, we will go out and go fishing native style.  I'll gather more pictures for you and share those.  I hope you enjoyed today's pictures.  Let me know what you think.
Posted by Lee MacArthur at 4:00 AM