A Brief History of Wedding Photography. 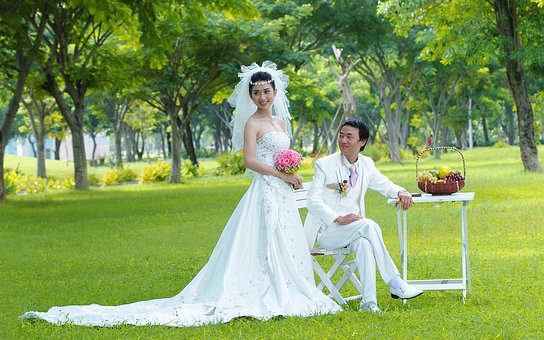 One of my nieces is due to get married next summer.  Many couples hire a professional photographer to snap beautiful pictures of everything from start to finish.

In today's society, most couples who marry end up with a book filled with pictures of everything so they can remember the event but it hasn't always been this way.

Wedding photographs have only been taken since photography itself began.  The first real wedding photographs began in the 1840's at a time when photography did not yet have a commercial use.  In fact, one of the first wedding photographs was taken of Queen Victoria and Prince Albert in 1840. These original photographs were taken in studies because of the type of equipment being used. These ones are called daguerreotype portraits where the photos were on tiny copper sheets and it required couples stand still for long periods of time so the image set.

In the late 19th and early 20th centuries, photography methods improved to the point photographers could take multiple pictures for a wedding album but most were still being taken in black and white even though color became available in the early 20th century.  Early color photographs faded due to its unreliability'

Towards the end of World War II, techniques changed enough that wedding photographs moved out of the studio into capturing the event itself.  The end of World War II brought a boom of marriages which caused photographers to shoot weddings on speculation with the understanding the bride, groom, and families would buy the photos they like best.  Cameras became more portable, lighting more compact, and film came on rolls.

The style of photography still remained the same with heavy lighting so even the candid shots were posed but in the 1970's when 35mm cameras became popular.  The new style called wedding photojournalism which captured the whole wedding from start to finish.  This also meant that any amateur who had a camera could advertise and take pictures.

The latest change came with the development of digital cameras. The digital camera is small, portable, and all photos can be edited and sharpened. In addition, these photos are easier to distribute to all parties.