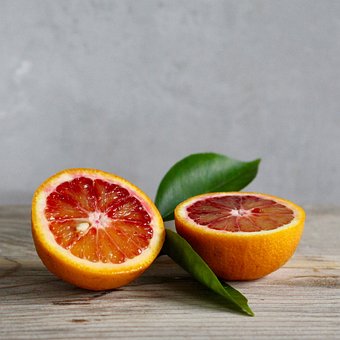 The first time I had a blood orange I didn't know what to expect because of its name.  I had never heard of them but saw one in the store so I decided to try one.

Since then I've had several and enjoyed each and every one.  If you look at the picture to the left, you see what one type looks like.

Yes blood oranges are red inside and some  have red splotches on the outside.  Even the juice is reddish. The amount of red depends on the variety and its growing conditions.

The red is caused by anthocynan, a pigment found as red in cherries or red cabbage, or blue in blueberries or purple in eggplant.

These oranges provide large amounts of vitamin C, potassium, vitamin A, calcium, and fiber.  In addition they carry a powerful antioxident.

The earliest written record appeared in 1646 when a Jesuit priest wrote about a purple flesh colored orange that tasted like a grape.   As far as anyone can tell, this is the result of a natural mutation and no one is sure where they originated although it is thought they originated in China and was brought to Sicily and Spain in the 11th and 12 century.

Blood oranges are grown around the world including places like Texas and California.  There are several varieties include Tarocco, Moro (or Morro), and Sanguinello (or Sanguigno).  Sanguinello oranges have a deep reddish purple flesh while the Tarocco flesh has a light red tint. The Moro has a medium red flesh and is the most common blood orange found in the United States.

Since blood oranges are a winter crop, they tend to be available between December and April.  In Italy, they are as common as Navel oranges while in the United States they are a specialty item so they command a higher price.  You can find them in many stores including Trader Joe's and Whole Foods, and some of the store chains.

The flavor is less sweet and less acidic than regular oranges.  Since it is a only a winter crop, it is possible to purchase the juice year round which can be used in cooking, making syrups, or adding as flavoring goods.   I tend to only go for the fruit and enjoy it when I can get my hands on a few.  They don't last long in my fridge.

Let me know what you think.