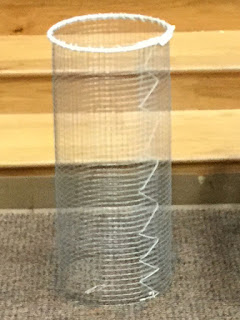 Today, we went north, out past the end of the old airport to a nice area where one of the teachers has a black fish trap placed.  To the left, you see an example of a black fish trap.  The idea is they swim into the opening and there is a small opening at the other end which leads to a holding area.

Black fish live in swampy, muddy, grass filled area similar to the picture directly below.  People place the traps out in these areas, mark the taps with a something so they find them again, leave them out for a few days before checking them.

These fish are able to survive under conditions of low oxygen.  I spoke with someone who told me that his son placed two in a regular aquarium and they died due to having too rich a level of oxygen in the water.  These fish are not used to that. 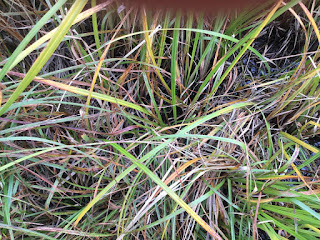 The interesting thing about the location this particular trap was placed, is the grass found in the area.  You can see the grass has rather wide blades.  I mention that because locals pick two or three distinct types of grass to use.

The grass from these plants were used many years ago to weave seats for paddlers in a kayak.  I'm told the woven seats are quite comfortable.  Another, thinner type of grass is wonderful for weaving baskets and such. 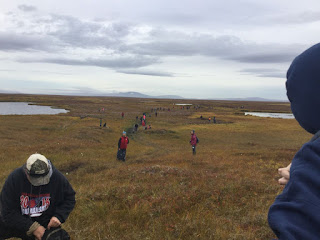 The picture to the left is a great picture of the local terrain with all its lakes and mushy ground.  There are lots of plants found in the tundra, many are used every day.

At one points kids were playing a weird version of baseball on the tundra and having a blast.  I still do not know all the rules. If I used two words to describe the game, its organized chaos.

In the distance, you see some mountains (hills) volcanic in nature and found between the village and the sea. 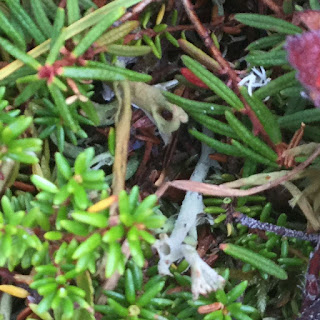 The picture to the right contains a couple of plants.  The ones with the long skinny green leaves around a red stem in the upper half is called Ayuk or Labrador tea.

The Ayuk is burned to chase away bad feelings and clean the air.  It is made into a tea to help people remain healthy so they often add it to their black tea. It has an interesting flavor.

In addition, the Ayuk is often used to help people get over sore throats or congested chests.  I just use it instead of incense at my house.

The smaller plant in the lower left cornet produces a small black berry called blackberries around here.  Unfortunately, there are not that many black berries available because the birds had a lovely time eating them. 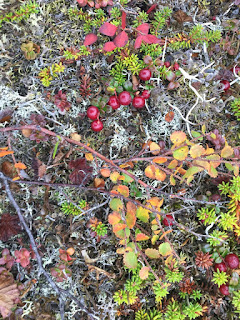 This is a close up of native cranberries.  There are similar red berries but they can make you sick.  The easiest way to be certain is to pick the red berries off the small plants with round curled leaves.

The other berries look so different.  Cranberries are usually found among blackberries which make them much easier find.  We found a few blackberries while out picking cranberries.  I'll be going out tomorrow and probably looking for more. 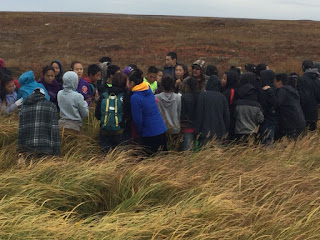 The students are standing around a black fish trap while being instructed by one of the men.  The village is trying to keep its culture alive so they insist on including it in the school curriculum.

The kids are standing in muddy water. It was interesting watching students walk along the path right next to the grassy area.  It bounced kind of like a rickety bridge until one too many students went across and it broke.

Then the kids started getting a bit muddy. 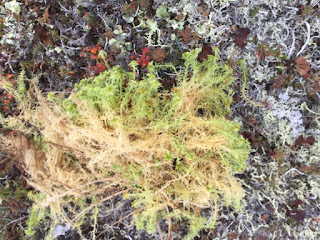 The picture to the left is of a moss.  I do not know the name of it but its quite valuable to the local population.

One of the young ladies shared the following information with me because her parents are quite traditional.

If you took this moss in your hands and squeezed, you'd see droplets of liquid come out. She didn't know if the liquid was drinkable but said she'd ask her mother for me. 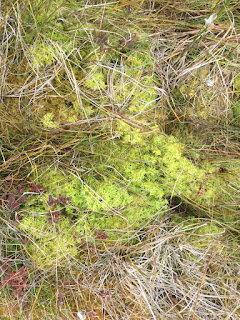 They use it to mop their floors since its so damp.  They gather a nice supply of it during the summer and fall so they can clean their floors as needed.  Once these plants are all gone, they use a regular mop.

Another young girl stated her grandparents dried these moss to use instead of toilet paper if they run out or are camping because the moss is extremely biodegradable.

The picture to the right shows what it looks in the ground.  The other picture shows it once its out of the ground.  These are beautiful plants that grow in clusters in damp areas.

Tomorrow, we are heading out a different direction to go fishing among other things.  I plan to take pictures of the fishing rods which are quite different than most people use.  The most common fish they are likely to catch are tomcods.

I hope you enjoyed today's entry.  I'll post another entry tomorrow with new pictures and lots of new information.  Every year, I learn more things about the culture and I love it.  Let me know what you think.
Posted by Lee MacArthur at 4:00 AM

Email ThisBlogThis!Share to TwitterShare to FacebookShare to Pinterest
Labels: Blackfish and berries.