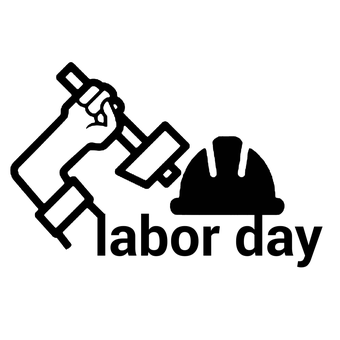 It is that time of the year again.  School has begun in many states.  In some places, frost is starting to tinge the morning grass.  Yet today is a major holiday for most people except retailers, emergency workers, airlines, and a few businesses.  We celebrate Labor Day on the first Monday of September but for most of us, it’s a three day weekend.  Its original meaning lost in the mists of history.

It began long before our grandparents were born as a tribute to the American workers for their contributions to the economy.  It began back in the 1880's in New York City but there is some dispute as to who actually suggested the first celebration.  However the first legislative recognition came in Oregon in 1887.

Over the next few years, other states joined until 1894 with 23 states already celebrating labor day, the federal government officially recognized labor day as the first Monday in September. It has been celebrated since then.

Most people are unaware of its origins.  Where I work, everyone sees it as a nice three day weekend to go hunting, fishing, or just catch up with life in general.  I am one in the last category of catching up.  Other people took off into Anchorage to take care of things since we don't often get a long weekend while others hopped in a boat to go off to camping to enjoy the time off.

We don't hit the malls because the closest one is about two hours away by air. So unless I want to spend about $800 for just air fare to get to Anchorage, I am not going running there to take advantage of sales.  Besides, the best deals are in October when the PFD comes out.  For nonAlaskans, PFD is the Permanent Fund Dividend given to every Alaskan resident.  It should be around $1000.

Even if I wanted to go to another village, I'd have to pop in a boat to go to Hooper or Scammon.  The advantage to Hooper is that they have the AC store. AC stands for Alaska Commercial a chain of stores found in some of the bigger places in Alaska.  Its been around for a very long time.

Otherwise, most people are just going to go out on day trips to fish, pick berries or greens, or just enjoy the weekend.  I might take a nice trip around the perimeter of the village, heading out to the tundra before heading back in via the old airport.

I hope everyone has a great Labor Day weekend filled with relaxation.  Let me know what you think.
Posted by Lee MacArthur at 4:00 AM