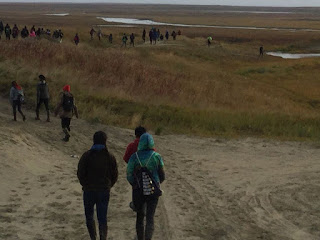 Yesterday, we went out again as part of Sea Week.  The group went out to manaq which is the local term for fishing.

The picture to the left was taken around 10 AM as students walked out to the tundra, then up river to the spot chosen.  We set out when it was low tide.

As you can see, the group was quite spread out.  I tend to bring up the rear so I never get a short break and I get there in time for lunch.  The silvery water in the distance is the river we were aiming for. 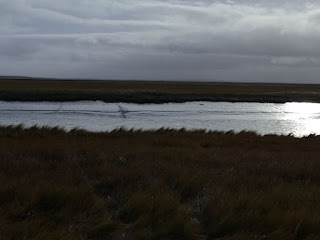 This is a close up of the river.  Its low tide so there were several feet of muddy banks on each side.  The mud is nasty enough to suck boots down into the muck.

The river during low tide is not that deep.  This river is filled with a variety of fish.  Our walk took us parallel to the river for a couple of miles.  A few places were absolutely nasty, while others emitted a nasty stench as you crossed the still water. 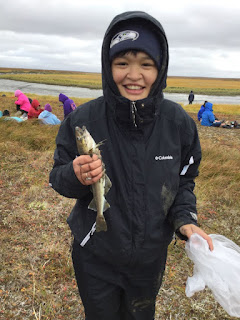 This young lady caught the first fish, a tomcod.  She was so proud, she showed it to everyone before asking for a plastic bag.  I checked back with her at the end of the day but she'd only caught one more.

One boy caught a "devil fish", released it and the next person in line caught the same fish.  I asked where the name came from.  The kids said the fish has horns, thus its name.  Another girl said it also has spines down the back of the neck.

The kids were enthusiastic in sharing information on their catches.  A boy held up his catch, a small flat fish locally called a "flat fish" but known as a Flounder by everyone else.

Half the students ended up quite muddy because it wasn't high tide yet so much of the bank was still muddy.  Several students threw mud at each other while others played in the mud like young children. 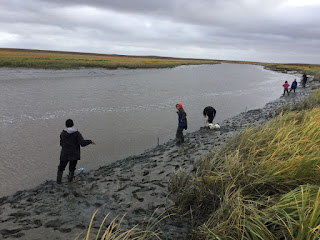 This picture shows the students lined up along the muddy banks. If you look carefully, you can see short sticks planted in the side, right by the water line.

The sticks are the fishing pole.  There is a string tied to the end of a stick with one or more hooks attached.  People bait the hooks, throw the string into the water and push the other end into the mud or dirt.

They monitor the string to see if it becomes tight. 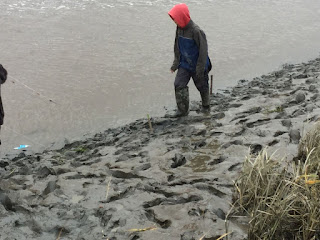 The tightening is a signal there is a fish on the end.  The photo to the left is a closer shot of a manaq which is just behind the person with the red hoody.

The muddy banks is filled with deep footsteps from students walking.  The grass in the lower right corner signals the beginning of the grassy area.

By the time we returned to school about half the students were muddied to some degree. 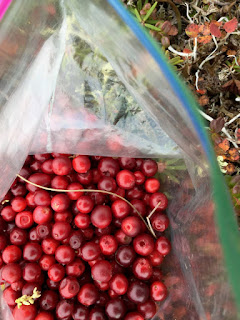 I didn't come prepared to fish, so I spent a few hours on and off collecting wild cranberries which are much smaller than commercial ones and not tart in the same way.

I collected about half a bag today.  I was not doing a serious job.  I wanted to show you what they looked like since few people get a chance to see wild cranberries.  I gave my share to another teacher.

Her guy makes a wonderful cranberry sauce so I figured she needed more than she'd collected.  When we go out today, I'll collect another bag of cranberries to trade for homemade agutak.  mmmmmm, so good.

We found a few blackberries sprinkled among the cranberries because the two grow next to each other. 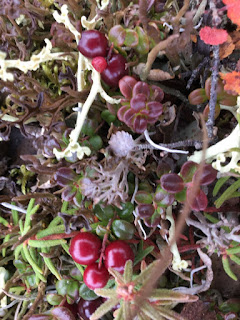 This is a close up of cranberries. The thin white strands are some sort of lichen often found next to the cranberries.  At the bottom, right next to more berries are Labrador tea.

Cranberries are found in clusters of three to five berries in each group.  The picking goes quite fast especially if you find an area with tons of plants.  Cranberries are best when they've been touched by a light frost.

In addition you often find low bush blueberries sprinkled through out this same area but they prefer the side of hills.  Unfortunately, the blueberries are often gone by the third week of August.  This year, they went earlier due to birds.

That tells me, there was less food available for the birds so they ate more of the berries so fewer were available this year for  gathering. 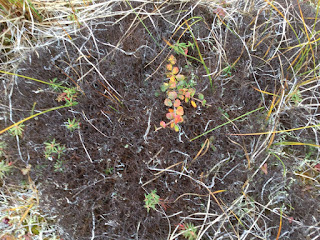 Today, I saw tons of this black plant sprinkled among the hills near the fishing place.  One of the ladies said they call it "Josephs Grass".

I didn't get a chance to ask if its used for anything. The plant is quite hairy looking and stands out because its so dark.

Ohhh, I spoke with someone and discovered the liquid squeezed out of that moss is not drinkable but it could be used for other things. 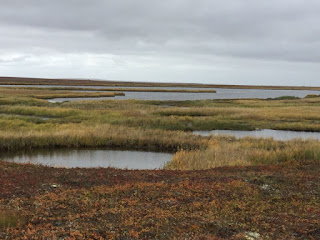 The final picture is from the trip back to school.  The area is filled with lakes, rivers, sloughs, and other bodies of water.

I'll be posting new photos on Monday of our last day out.  We are taking the students out by some old sod houses where people lived long time ago before the village was founded here.

Maybe I'll include a bit of history of the village next week.  It looks beautiful but the day was chilly with a stiff breeze blowing all day long.  First thing I did when after walking in the door was taking a nice blistering hot shower to get rid of the chill.

I hope you enjoyed it.  Have a wonderful weekend.  Let me know what you think.
Posted by Lee MacArthur at 4:00 AM

Email ThisBlogThis!Share to TwitterShare to FacebookShare to Pinterest
Labels: Manaq or fishing.