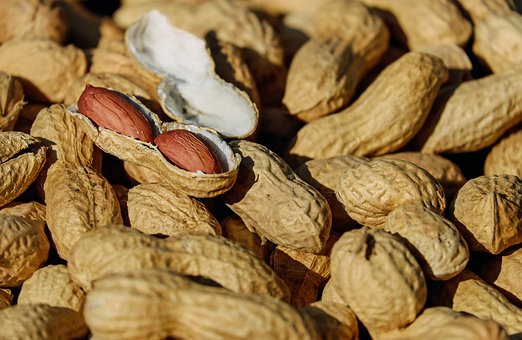 There was a song my grandfather used to sing.  I only remember a few words but one line was something like "Peas, peas, peas, peas, eating goober peas."  I had no idea at the time the song referred to peanuts.  Nor did I know that song has been around since the Civil War.

Before I get into goober peas, ground nuts and other names, peanuts are not nuts, they actually belong to the same family as peas and beans.  They are legumes. and the nuts form when tendrils reach down from the plant, dig in the ground, and produce the nuts.

Peanuts were brought to America by the African slave trade but it didn't originate in Africa.  It came from South America,  where it spread to Europe, Africa, and Asia due to the Portuguese and the Spanish.  It took off in Africa and Asian because it was easy to grow and people found uses for it. When the African were captured and brought to American, they brought peanuts with them.

At first, peanuts were grown by slaves as food or fed to the hogs because their owners because them to be below them. In fact, peanuts were not grown extensively as a commercial in the United States early on because they were difficult to harvest so their growth remained in the south.  Furthermore, when the Civil War began, the south was not in a good position because they'd been importing most manufactured products and they had a poor railroad system.

By the turn of the century, George Washington Carver published his work on peanuts and the name peanut has won out but if you read agricultural publications or literature from the mid to late 1800's you'll find the peanut referred to as ground nuts, goubers, goober peas, pindar pea, earth nut, ground pea, mandubi, and monkey nut.

Although peanut won out in official usage, you'll find older names are still used in certain areas in the south.  Many times you'll find goober is still in use when you have a slice of goober pie, goober cake, or boiled goobers.  In fact, there is one town in New Mexico where they refer to a town as "Goober Gulch" since its where peanuts are regularly gown.

Interesting facts about peanuts
1.  India and China are the world's largest producers of peanuts with the United States placing 3rd on the list.

2. It was just after the turn of the 20th century that peanuts replaced cotton as the leading cash crop in the south.

3. In the United States, peanuts are primarily used in peanut butter and according to regulations, peanut butter must be at least 90 percent peanuts.

4.  Both Thomas Jefferson and Jimmy Carter were both peanut farmers.

5. George Washington Carver the father of the modern peanut industry developed over 300 uses for the peanut.  He could make a complete meal from soup to dessert out of peanuts.

6. The term peanut gallery originated in the late 1800's to refer to the cheap seats in the balcony.  If they did not like a performance, the audience was known to throw peanuts at the performer.  Peanuts were the cheapest snack available at a theater.

7. Race car drivers often ban peanuts from their cockpits because of superstition dating from 1937 when it was rumored they found shells at the site of two different crashes.

8.  The "Peanuts" cartoon was named after Howdy Doody's peanut gallery which as an onstage audience of about 40 kids.

I hope you enjoyed the history and facts on peanuts.  Let me know what you think.