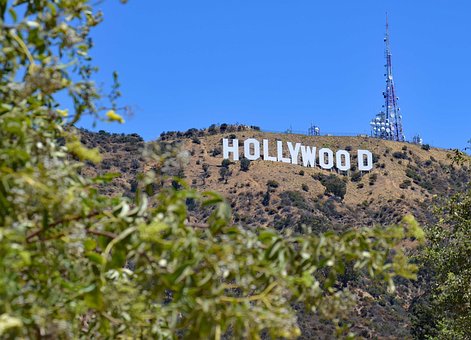 Growing up, I remember my parents talking to me about the stars who had been discovered when they got to Hollywood.  One of my relatives tells me, she went to the same junior college in California was the lady who portrayed Miss Kitty on the old Gunsmoke series.

Another relative talks about a classmate who went off to Hollywood for a career in movies and guest shots but never made it too big.  He'd seen a movie and recognized her on the screen.

Even today, it has an allure all its own.  It calls people to rush out to try for fame there even though few make it as stars, only about 1percent make a living acting but what do you know about the town itself.

The town began with one adobe house in 1853.  It was located a short distance from Los Angeles but over the years the area became known as a great agricultural area.  Up until the 1880's it remained an outpost.  A land speculator purchased 160 acres after moving from Kansas. Since it was basically unnamed, he allowed his wife to select a name.  She chose Hollywood after hearing about another person's home town of the same name.  So on February 1, 1887, he submitted a grid of his new land to the Los Angeles County Recorder's office with the town labeled Hollywood.

The first street was named Prospect Avenue but was later changed to Hollywood Blvd.  The place continued to grow.  By 1900, the town had a population of 500 people with a post office, hotel, newspaper, and two marketplaces.  In addition, there was a single street car that traveled through seven miles of orange groves to Los Angeles but the two hour trip was made on an irregular schedule.

A couple years later, the first part of the famous Hollywood Hotel was built and two years after that, the city installed a new trolley system which cut travel time.  About the same time, city voted to allow itself to be annexed by Los Angeles due to needing access to a new aqueduct.

Around 1900, movie makers moved to the Los Angeles from the east coast because of the strict rules set by Thomas Edison's Motion Picture Company in New Jersey.  Since he owned most movie making patents, he sued most movie companies to stop production.  In addition, the area offered great weather conditions, a wide range of terrains, and most important, the location was close to Mexico because they could escape there when Edison's agents came out looking for productions.

Within the next 20 years, there was an explosion of studios appeared in Hollywood but the first moving picture studio appeared in 1919 in Edendale the next town over.  Over the next few years, the movie industry continued to grow until it was decided to hold the first ever Academy Awards in 1929 at the Hollywood Roosevelt Hotel.  Between 1927 and 1948, movie studios had so much power, they controlled what films were made or shown across the country.  If you wanted to be a star, you had to become part of the system.

Studios owned movie theaters nation wide but in 1948, the supreme court ruled that studios could no longer own theaters where they showed only the films made by the with actors employed only by them.  This opened the door for the independent movies.  In addition, television made an appearance which caused changes to Hollywood.  In addition to movie studios, television and music studios sprung up and the KTLA, the first commercial television station began broadcasting in 1947.

Hollywood weathered the communist scare in the early 50's, the changing face of the 60's and the rise of cable.  Hollywood is 3.51 square miles with about 90,000 people living there.

Let me know what you think.  I hope you enjoyed it.  Have a great day.

Email ThisBlogThis!Share to TwitterShare to FacebookShare to Pinterest
Labels: Hollywood.