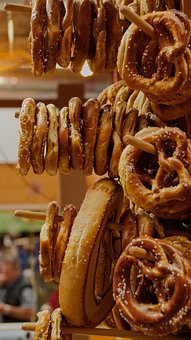 Hard pretzels are something you eat with your beer or snack up if you need a quick snack.  Soft pretzels on the other hand you drown in cheese or mustard and enjoy.  I remember the pretzel place I always passed between flights where you could get the highly salted creation in any of several ways.

A friend who recently visited Germany told me all about soft pretzel sandwiches he ate there.  Apparently, its one of those things you can get anywhere and is eaten by everyone.

It turns out that in German, the type of dough used in pretzels is referred to as Laugen.  The bread is dunked in a lye or baking soda solution before being baked to create the harder crust and the soft inside.  The term bretzel or pretzel as we call it refers to the shape the laugen is made into.

So bakeries make the Laugen, shape it into the familiar pretzel or in rolls, or knots, or any other shape.  The bread is often finished off with a sprinkle of large grains of salt, seasme seeds, poppy seeds, and sometimes even pumpkin seeds.  No matter the shape, the outer crust has the traditional dark hard appearance.  When they talk about soft pretzel sandwiches, they often refer to the type of bread rather than the shape.

The Laugen, sometimes in the pretzel shape is cut in half, then smeared with butter or creme cheese to protect the softness of the bread from the filling of salami, or cheese and finished with lettuce.  These sandwiches can be purchased at any bakery in Germany. They make a nice quick lunch and are as popular as the Plowman's lunch in the UK.

The pretzel itself has been around since 600 AD when Italian monks presented students with pieces of bread dough twisted into the shape of crossed arms because  the standard way to pray was with crossed arms.  As the shape spread through Europe, the three holes came to represent the father, son, and holy ghost.

These beauties met the Catholic Church's rules on fasting and avoiding certain foods because they were made of flour, water, and salt. The dough was turned into soft squishy balls much like today's German bread.  By the Middle Ages, the pretzel had become the symbol of good luck, prosperity, and spiritual fulfillment. In 1510, the pretzel made great strides when the Turks tried to invade Vienna by digging tunnels under the walls.  The monks were making pretzels in a basement and heard the digging so they alerted the authorities who drove off the Turks.  As a reward, the emperor granted the pretzel makers their own coat of arms.

One legend says in 1614, royal couples incorporated the pretzel into the wedding ceremony.  It is thought this is where the phrase tying the knot came from.  While in Germany, children in the 17th century wore necklaces made out of pretzels around their necks in the hopes of having good luck and prosperity in the coming year.  No one is sure when the pretzel arrived in America but the first commercial pretzel factory opened up in 1861 in Lititz Pennsylvania.

It wasn't until 1935 that someone created a machine to automatically make pretzels.  Up till then, they were manufactured by hand.  Even now, Pennsylvania makes 80 percent of the pretzels produced in the country.

I've never seen a pretzel sandwich served in the United States, but I can't wait to try one when I go to Germany next summer.  I'm heading over for a wedding and debating whether I should stay for two weeks just to wander around and check out the country.

Email ThisBlogThis!Share to TwitterShare to FacebookShare to Pinterest
Labels: Pretzels and sandwiches.