A Short History of Tanning 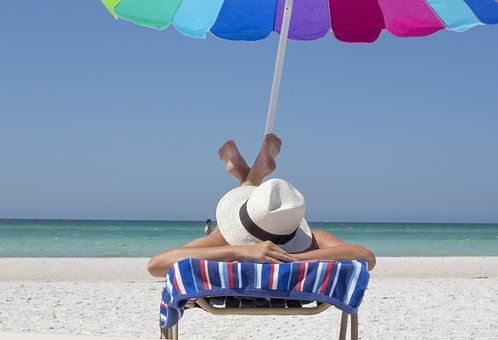 When I was a teenager, I remember all my friends worked on getting a nice deep tan because that was considered "the" thing to do.  I also remember seeing a male star who tanned so much, his skin on TV looked like tanned leather.  Now the pendulum is moving the other direction to a more healthy  skin color but have you ever wondered about the changing view of sun tanning over the years?  I have.

Originally, people desired paler skin because it indicated they had money and were of a higher class.  They didn't have to go outside to earn a living and the skin color proved it.  Women often used  hats, gloves, parasols to protect their skins but other times, they relied on chemicals to obtain and keep their skins pale.  For instance, many use Ceruse a popular skin whitener in the 16th century but due to the lead content proved quite dangerous.

As cities grew and the lower classes became crammed into certain areas, they were unable to go outside and began either working in crowded factories or in crowded apartments so they developed pale skin and diseases that went with this situation.  Around the late 1800's and early 1900's, inventors began creating machines to provide light to help increase people's health and eliminate rickets etc.

This lead people to going out more in sunlight to get healthier but they had to be careful or they might burn.  At this time, sun screens really did not exist so many turned to skin bleaching products designed to eliminate tans and freckles.   The attitude towards being tanned started changing in the 1920's when hemlines went up, corsets loosened up, and prohibited activities such as smoking, drinking, and dancing became fun.  Suntanning became a way of shedding the old Victorian standards.

Around 1923, French resorts began opening over the summer months instead of closing for the off season.  The rich began flocking to the shores to sun bath.  That was the same year Coco Chanel returned from a cruise with a beautiful tan.  Her new look combined with the fact she was a fashion designer made the tan a much needed part of one's look.

By 1929, Vogue magazine claimed that sunbathing lead to a whole new industry that produced swim suits, clothing and cosmetics designed to frame people's new skin tones.  About the same time, sun tan lotions and sun screens began developing. It is said that sunbathing really took off when bikini's and two pieces hit the fashion world.

In 1971, Barbie joined the sun tanned crowd when they gave her blonde hair and a darker skin tone letting young girls desire the same.  Just seven years later, the first indoor tanning bed hit the market so that anyone could work on their tan, rain or shine.

Beginning about the same time Vogue made their observation in 1929, people began working on sunless tanning.  At first, these products were essentially a body make-up but during the 1950's a scientist noted that a medication gave people darker skin without staining their clothing. This ingredient -dihydroxyacetone (DHA) -became the basis of modern day sunless tanning products.

We occasionally see people sporting the extremely deep tans but there is a move towards a slightly lighter, more "natural" looking tan.  For myself, I'm wearing lots of sunscreen because I don't want to face looking way older than my age when I'm in my 60's and 70's.  Let me know what you think, I'd love to hear.  Have a great day and stay safe.