The 10 Most Popular April Fool's Pranks For Adults. 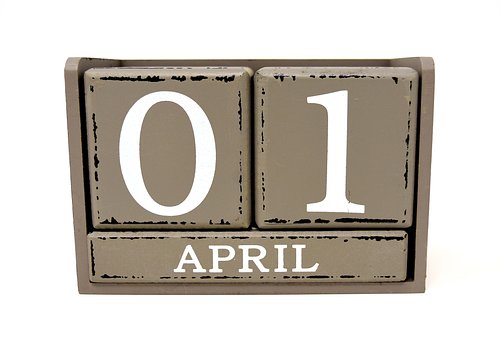 Welcome to April First also known as April Fools day. The day when people try to fool each other by playing tricks on each other in school.  Some people go full out while others look at it as another day.

Since I work at a school, I get too many "Look, your shoe is untied" or  something similar.  Fortunately, no one goes over board.  I personally do not celebrate it because one of my friends died on that day when I was in about 8th or 9th grade.  She went diving and trapped herself under a ledge on March 31.  We heard the next day but thought it was a joke because of being April 1.

Before I talk about the most popular pranks, I'd like to give you a quick history of the day. So how did this all start?  No one is really sure. We know that the Roman's and the Hindi's celebrated their New Years around April 1st.  In medieval times March 25th was celebrated as the start of the New Year.  Some say when Pope Gregory changed the calendar, many countries were slow to move their New Year's to January 1st so they continued celebrating it on April 1st.  The problem with this explanation is that when England finally got around to adopting the new calendar in the mid 1750's, they were celebrating April fools Day, so that does not appear to be a true connection.

Another story is that back when Constantine was emperor of the Roman Empire, the jesters in his court, claimed they could run the empire better than he, so in return, he named one of the Jesters as king for the day.   The jester decreed that the day must be one of absurdity and since it was so successful, it became a tradition.

In France, they place a fish on a person's back because they refer to April 1 as Poisson D'Avil or The April Fish.  No one is sure what but there is some suspicion it might be tied to Jesus because the fish represented early christianity.  In addition,  Napoleon earned that nickname when he married Marie-Louise of Austria in 1810.

So on to the pranks.

The fake tattoo is one of the popular ones where people either get fake ones, order custom ones, or get a pull on sleeve which allows someone to have a tattoo for the day.  If your coworker suddenly sports a cool new tattoo, there is a good chance it is temporary.

If you come across an article stating they are building a dome shaped freezer, large enough to cover 500 acres to protect the melting ice and polar bears, you've run across a false news item written for today specifically.

Then there is the fake out prank where someone puts this big intimidating sign on your desk that says "April Fool's Day" and nothing else.  You'll spend the day "waiting" for the prank to happen but it never does.

Out of the Science realm comes the wonderful new item that scientists have discovered a way to harness potential earthquake energy by turning it into usable electrical power.  The resulting power will be used by cities to run it's electrical plants, etc.  San Francisco is scheduled to begin using it in 2019.  Remember this is fake.

Want to gross your coworkers out?  Take a brown paper bag, sealed with duct tape and place it in the refrigerator. Don't forget to label it as something interesting like "Brains" or "Weasel"

Can't sleep?  Check out the REM goggles that help your brain simulate REM brain waves while you are wide awake.  In addition, they improve your memory, and experience a rested mind.  People will want to know where to buy these goggles so be prepared for that question is you share this fake news.

Another prank designed to drive people crazy is to place lice shampoo in the company restroom without being seen and then as people begin to speculate about it, scratch your head regularly. Just don't let them know you perpetrated the joke.

Of course, you can tell people that with the success of the forever postage stamp, the United States government issued the Forever dollar for $1.05 each with a conversion rate of 77 cents per Euro forever during a limited period in 2009.  You can tell the difference because they have the letter F on them.

Last but not least, one can gather all the plants in the office and relocate them into one cubicle or wrap everything in one person's cubicle.