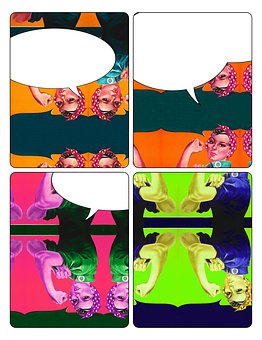 Growing up, I loved reading the comic section of the Sunday paper because all the comic strips were in color but I had to wait till my father finished reading them.  He referred to them as the intellectual section not the comics.

The first "comics" were actually satirical political illustrations in which artists drew caricatures of famous people in the early 1700's.  These drawings  poked fun at politicians and topics of the day.

In 1754, Benjamin Franklin published the first editorial cartoon in an American news paper.  The picture showed a snake with a split head and the words "join" or "die".  He hoped to encourage colonies to join the future United States.

Two magazines, Punch in the United Kingdom and  Harper's Bazaar in the United States started publishing in the mid 1800's and were known for their political cartoons.  In fact, Thomas Nast an American well known for his satirical illustrations is credited with inventing the political symbols for the Republican and Democratic Parties.

Up till 1827, all comics were composed of one panel only but then Rudolphe Topffer published the first multi panel comic.  Ten years later, he published an illustrated book called "The Adventures of Obadiah Oldbuck".  The book took off in Europe and then it was published in the United States as a newspaper supplement in New York City around 1842.

In 1865, the first syndicated comic strip began publication in Germany.  "Max and Moritz" followed the adventures of two young boys.  The first one appeared in 1892 in the United States. This one "The Little Bears" appeared in the San Francisco examiner in color, right next to the weather report.

The one designated as the first real comic strip, "The Yellow Kid" appeared in 1895 in the New York World.  This comic strip caused other strips to be published including the Katzenjammer Kids.  The author of the Katzenjammer Kids started the tradition of using sawing logs to indicate sleep,  circling starts to indicate pain, and he was the first to use word balloons for dialogue.

In the United Kingdom, The Daily Mail commissioned Charles Folkard, a children's illustrator s, to begin producing a daily cartoon for children.  His strip, Teddy Tail, gained such popularity that other newspapers followed suite with their own comics.  The first cartoon strip aimed at adults appeared in the United Kingdom in 1921 with "Pop".  This sophisticated strip showed how the narrative could carry across panels.

In the early 1900's there were around 150 comics being published. By 1912, The New York Evening Journal began publishing a full page devoted to cartoon strips and single panel comics.  Within the next 10 years comics such as "Little Orphan Annie", "Gasoline Alley" and "Popeye",  were regulars.  "Gasoline Alley" began in 1918 and is still published today.  It is also the first comic strip to show characters age rather than staying the same year after year.

It was during the 1930's,  newspapers began publishing a complete section devoted to comics in color.  These sections were designed to sell more Sunday Editions.  Between 1930 and 1980, more and more comic strips were published and this time is considered the golden age for this art form.  Over the past few years, interest in newspapers have declined but interest in the internet has increased and its easy to find comic strips published on the web.

Along with the development of comic strips, the ability to syndicate them also grew.  Comic strip syndications act like an agent for the artists.  Syndicates get hundreds of submissions a year but only a few are actually accepted.  Early on, most syndicates owned all rights to the comic strips so if the creator retired, died, or moved on, they could still keep publishing the strips.  This was because the contracts lasted for 10 to 20 years.

Occasionally, the artist would retain rights to their creation but that wasn't particularly common until the 1940's and 50's when they'd sue for their rights. In 1985, a new syndication began which gave people  the ability to keep the rights to their own strips. This was a big step.

I hope you enjoyed this short history of comic strips. Let me know what you think, I'd love to hear.  I'll cover how comic strips evolved into comic books on another day.  Have a great day.

Email ThisBlogThis!Share to TwitterShare to FacebookShare to Pinterest
Labels: History of Comic Strips