The Changes in Women's Exercises Through Time. 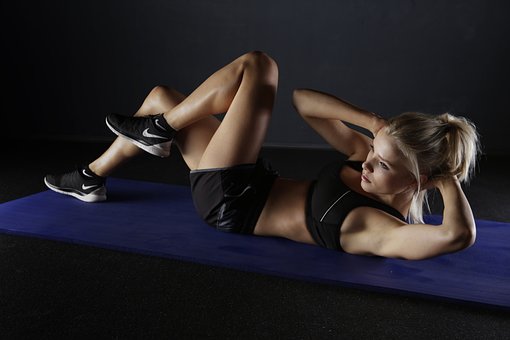 If you are over 30 or even 40, you know that exercises has changed quite a bit over time.  There's been Jazzercise, Zumba, and so many others.  Lets look at the various types and how its changed over time.

In the early 1900's to about 1920, women stretched a lot, which eventually transferred to machines.  One machine, a Vibro Slim, was a belt that massaged the body and was perfect for the women wearing high heels, pearls, and dresses.  Others such as stationary bikes, or rowing machines were popular.

When the 1930's rolled around, the Glamor Girl workout became popular.  This workout required women to use repeated movements such as twisting so she could get rid of her spare tire.  Other movements such as touching your toes with your opposite hand were quite popular. This type of exercise continued through the 1940's.

In the 1950's the focus switched to calisthenics and Hula Hoops. The use of Hula Hoops took off when Wham-O released a plastic version anyone could purchase and they sold over 400,000 by 1957.  A 30 minute session with the hula hoop made a great workout.

In the 1960's   vibrating belts hit the exercise front again. These were marketed with the idea you'd put the belt over the part of your body, turn it on, and it would magically make your fat disappear. With minimal work, you'd loose weight and get a better body.

The 1970's brought us Jazzercise a high intensity form of exercise combining Jazz dance, ballet, pilates, yoga, and kickboxing.  This was the beginning of choreographed exercise because Jazzercise let the instructor set the routine to their choice of music.

In the 1980's women moved more using aerobic movement.  Aerobics was an off shoot of Jazzercise with fewer dance movements and more movements such as marching in place..  Although it began in the 60's, it did not become popular until Jane Fonda released a series of video tapes and books.  In addition, aerobics spread out into water aerobics and step aerobics.  I

Suddenly in the 1990's the focus moved to tight buns and thighs.  They used the Thigh Master to tighten their inner and outer thighs along with focusing on their rears.  They often used the Buns of Steel videos to help tighten rears.  In addition, Billy Blanks introduced his Tae Bo workout that combined martial arts, boxing, dancing, with hip hop.  It took off.  During the same decade, a cyclist from South Africa took cycling indoors and renamed it Spinning.

When the 2000's came, Zumba hit the scene with its latin inspired workout that combined salsa, tango, bachata, and flamenco steps.  It is found world wide and gives people a high intensity workout.  This trend was followed by the Cross Fit movement in 2010, combining gymnastics, weight lifting, pull-ups, and calisthenics.

Through all this time, people started or tried to start Gyms. For instance one of the first was Jack LaLanne who opened the first modern gym in the 1930's but people couldn't figure out why anyone would pay anyone to help them exercise. The other facilities such as the YMCA , mens health clubs or boxing clubs were private and specialized.  The first real gym, Gold's Gym, opened in 1965 but gained popularity when it was featured in a movie on body building with the likes of Arnold Schwarzenagger, and Lou Ferrigno ( the original Hulk).  Eventually gyms became coeducational and morphed into a variety of fitness places.

I hope you found this interesting.  Please let me know what you think, I'd love to hear, have a great day.

Email ThisBlogThis!Share to TwitterShare to FacebookShare to Pinterest
Labels: Changes in Women's exercise.