Grace Kelly, The Name Says It All 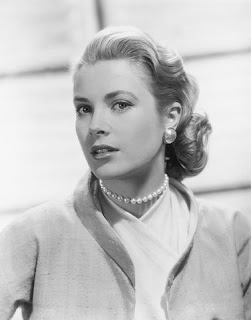 Grace Kelly, the woman who married the Prince from Monaco to become a Princess.  Although she stared in 11 pictures over a 5 or 6 year period, she left her mark on the world.

She caught the eyes of the world in her second picture "High Noon" and became a star.  Over her short career, she stared in three Hitchcock films.  It is said she set the standard for future actresses who were cast in Hitchcock films.

She had a very distinctive style which was quiet, timeless, and understated.  She influenced fashion designers of her time and even to today.  She was beautiful in a classic way.

Its interesting to me that she was born into a wealthy family where her father was a former athlete and her mother was the first woman coach at the University of Pennsylvania.

When she was old enough, she left for New York to pursue a career in theater and while there she worked a a part time model before going to Hollywood.  Her parents were not happy she took up acting but it was actually a Pulitzer prize winning uncle who encouraged her to pursue her dreams.

Once she started acting, her career took off and exploded.  In 1955 she was chosen to be one of the American group who went to France for the Cannes Film Festival.  It was there she met Prince Rainer when she participated in a photo shoot.  They hit it off.  When she went back to the states, they continued talking and got together again when he came on a diplomatic mission.  Three days after meeting her family, he proposed.

She excepted the proposal but as part of marrying into royalty, her father had to come up with a dowry.  He came up with $2 million which helped pay for the wedding.  She wore a 10.47 carat emerald cut diamond ring.  She married her prince in April of 1956. The gown she wore inspired designers to create similar gowns even to today.

Although Alfred Hitchcock tried to get her back to acting, her life as a royal princess precluded her from doing that.  She was one of those women who was as beautiful in her 50's as she was in her 20's.  All through her life, she maintained that wonderful look she began in Hollywood.

She died in 1982 of a stroke while driving.  Unfortunately, this caused her to crash, which killed her.  Almost 100 million people watched her being laid to rest via television.  Even after her death, she received accolades such as appearing on a stamp, a commemorative 2 euro coin, and a Sculling (rowing) even was renamed in her honor.

She may have had a short life, but she left her mark on the world.  I wish I could be as graceful as she and dress as well.  Let me know what you think, I'd love to hear.
Posted by Lee MacArthur at 4:00 AM