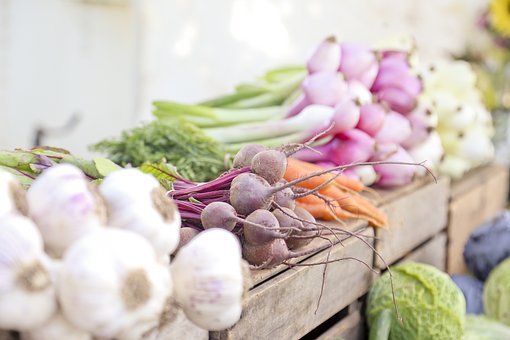 Our local farmers market runs from mid May to late September.  I realize its a much shorter time than many places but the snow does not fully melt till May and the first frost is usually the end of August.

We have several farmers here who must use greenhouses and crop covers in order to produce crops for the market.

I went through the farmers market this past Wednesday and found some really nice things.  Unfortunately, only about a third of vendors actually sell vegetables or berries.  The rest sell some sort of product like hand cream, photos, baked goods, or other items.

One of my favorite places is the vendor from Manley Hot Springs.  They often offer things no one else does because they are able to heat their greenhouses with geothermal heat.  They offered their first oriental eggplants of the season.  Ohh, they were such a beautiful, shiny purple.  I bought two.   They've been offering beans and cucumbers.  This is also the group who offers cantaloupes and if things go well, watermelons.  No they are not the huge watermelons.  The melons are more often the small one to two person size.

Another group who are local, grow beautiful greens such as kale, Swiss chard, bok choy, and other greens.  Today I stir fried some Swiss chard with onions, apples, and a bit of vinegar as a side dish to the eggplant Parmesan.  I plan to cook the bok choy up with some stock, butter, and a bit of miso until soft and the liquid is mostly gone.

One of the guys offered the first summer squash I've seen.  I didn't buy any because I had already purchased eggplant, Swiss chard, small onions, kale, bok choy, and freshly grown tomatoes.  I didn't want to buy too much because I want to buy a bit more come Saturday.

It is also the time of year when the farmer's market had the first chef out cooking for the public, showing what to do with a vegetable. This week it was kale.  He made a grilled kale, sprinkled with seasoned bread crumbs and topped with grilled shrimp and a yogurt sauce.  I'd never had grilled kale but this dish was soooo good.  I had mine without the shrimp and it was great.  I'll be sharing the recipe with you on Monday.

Unfortunately, not everyone was set up this past Wednesday because it was cold and rainy so attendance was down.  I plan to take pictures on Saturday to share some of the wonderful produce people bring to the market.

I hope you support your local farmers market.  The prices might be a bit more than at the local store but people make a living providing freshly grown food that has not had to travel hundreds or thousands of miles.  I love the freshness and the tenderness of the food.  Let me know what you think, I'd love to hear.

Email ThisBlogThis!Share to TwitterShare to FacebookShare to Pinterest
Labels: The Farmers Market.