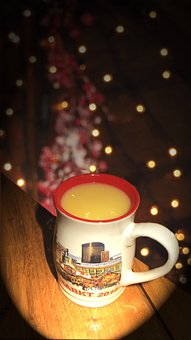 Yesterday, I looked at the history of egg nog.  Today I'm going to look at some interesting facts about egg nog.  You got one yesterday when I shared the riot at West Point in 1826 but there are more.

1. Over 135 million pounds of eggnog are  consumed every year.

3. Colonials used rum in their eggnog because it was less heavily taxed than  other alcohols.

4. In the 1800's, eggnog was often prescribed as a medical treatment for things such as malaria fever.

5.  Now other things such as lip balm, gum drops, etc are eggnog flavored.

6. Eggnog is usually only sold from mid-November to January in the stores.

7.  Eggnog is high in calories, fat, and cholesterol.

8. When eggnog is made into a custard, it can be turned into ice cream.

10. A hot version of it is said to cure sore throats.

So there you have it.  Eleven interesting facts about eggnog.  Let me know what you think.

Email ThisBlogThis!Share to TwitterShare to FacebookShare to Pinterest
Labels: Eggnog