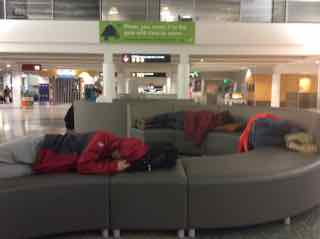 If you do much traveling, you'll wonder in for that crack of dawn trip and see people stretched out on seats trying to get some sleep before their flight departs.

Yes, I am one of those people you might see stretched out sleeping because I often end up at the airport where I get in late at night and leave early the next morning and its just not worth the cost of a hotel room for a few hours.


Seattle added some nice new S-shaped couches in the C concourse up by the C-11 to 18 gates, smack in the middle.  Yes, I grabbed a spot to lay down and sleep.  Well I tried to sleep but at least it was comfortable.  As you can see there were a lot more people with the same idea.

These sofas are brand new.  I checked with someone who said they'd been installed in the last three months.  I can tell you from personal experience that these are really awesome and quite comfortable.  You don't have those seat edges cutting in to you as you toss and turn.

It turned out my trip was a bit more exasperating than usual.  My first plane ran a couple of hours late when they didn't have a plane available to send out at the published time.  There had been bad weather the past couple days so they were trying to get rid of the back log and nothing was flying on time.  I was 5 minutes past the cutoff time so I was stuck in a small place whose average hotel room is about $200 per night.  I'm talking a small plain room with lousy internet.

I got out the next day and arrived in Anchorage just in time to run a fast errand before getting back to check in for my flight to Seattle.  Due to arriving in Seattle quite late at night, I spend the night there on a new couch while I waited for my connecting flight.  I finally made it to Pennsylvania around dinner time, Sunday, but totally exhausted.  During the trip, my computer was locked up in my carry-on and I really didn't get a chance to do anything on my blog until late Sunday evening.

Tomorrow, I'll tell you about the exciting entertainment I saw in SeaTac Airport in celebration of Christmas.  Have a good day.

Email ThisBlogThis!Share to TwitterShare to FacebookShare to Pinterest
Labels: Sleeping.