Alice In Wonderland - Me! 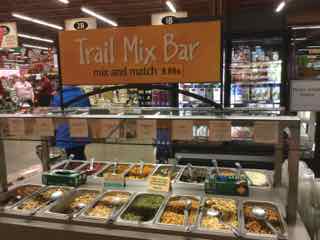 Most of you probably never feel like you are Alice in Wonderland when you go through the store.  I do!  Every time I leave Alaska and visit grocery stores in the lower 48.

Compared to here, the stores I'm used to shopping in have little more than the basics. Think of a 7 - 11 type store with appliances, guns, and plumbing supplies but nothing fancy when it comes to food.

I think the fanciest thing I've seen at grocery stores in the cities in Alaska is an olive bar filled with 10 different types of olives.  Yesterday, I popped over to the store closes to the hotel and felt like I'd fallen through the rabbit hole.

There were so many choices. I saw a trail mix bar which held all the ingredients one would see in any commercial trail mix plus a few more.  You get to create a custom mix for your tastes so you don't have search for the one without corn nuts or with pineapple and coconut. 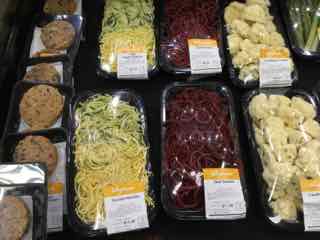 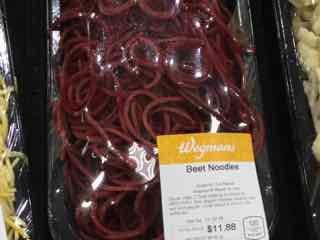 When I strolled by the produce section, I stopped by the pre-cut area because they had things I'd never seen before.  I've read about veggie noodles you use instead of pasta noodles for a healthier meal.  I actually bought one of the machines but I'm still figuring out how it works.

In the case, there were packages of veggie noodles ready to do.  They seemed rather expensive but I don't know for sure. I also found broccoli which had been riced and packaged ready to be used.

I found beet noodles which looked really good but I'm not sure what you would serve with them.  I just checked out the internet and you can serve them raw with feta cheese and dressings or cook them up with greens and feta cheese.

I'm wondering if they would be good cooked up with all the same ingredients for Harvard beets?  Or maybe mixed with mushrooms and curried?

So many possibilities but I think it would be easier to use zucchini noodles because we use zucchini in so many other foods. 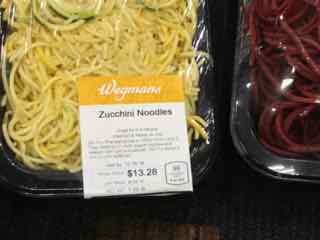 Perhaps served with an Alfredo sauce or some sort of pasta sauce.  I think its easier to be creative with the zucchini than the beets.

Would I buy something like this?  Maybe but it would be more as a convenience and time saver than anything else.  One of my new year resolutions is to figure out how to use the machines I bought earlier this year for spiralizing veggies into noodles and cutting them into julienne strips for my meals.

I did figure out one of the hand held gadgets designed for this really doesn't work but then again, I might not have figured it out.

I'm off, have a good day and let me know what you think.
Posted by Lee MacArthur at 4:00 AM

Email ThisBlogThis!Share to TwitterShare to FacebookShare to Pinterest
Labels: Noodles