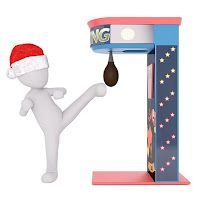 If you've ever watched the reruns of MASH, you'll have seen the episode where they celebrate Boxing day.  Its only celebrated in a few countries who have a historical connection to the United Kingdom or in a few European countries such as Germany.

In the show, the enlisted changed places with the officers so the enlisted men got to run things once a year.  It was supposed to improve morale but what is it , really?

The origins buried in the mists of time but it is speculated that  Boxing day started about 800 years ago in the Middle ages when churches opened their collection boxes so the coins could be distributed to the poor.  Some churches today, still open their alms boxes for the poor.  It is thought these boxes originated with the Romans who used their boxes to collect the bets on winter games.

This idea is based upon the carol "Good King Wenceslas" in which Wenceslas, a 10th century Duke, who saw a poor man collecting wood on Saint Stephens day (December 26th).  He gathered up supplies and delivered them to the man.

In addition it was traditional for servants to get the day off to celebrate their Christmas.  Historically, they would work Christmas so the day after, they received presents  which they took home, opened, and then celebrated their Christmas.  It was one of their few days off.

In addition, tradesmen such as milkmen, butchers, and others would collect their boxes or gifts from customers for the great service they'd given over the year.  It was the tip of the time, much the same as we'd give the paperboy a few dollars for his work.  Just for clarification a Christmas Box is another name for Christmas present.

Boxing day as an official holiday has been around since 1871 when it was declared such by Parliament. Over time, it has evolved into the British equivalent of Black Friday.

No one is sure exactly how Boxing day evolved.  I've given you a few theories but there is no proof of it origin.  Let me know what you think.