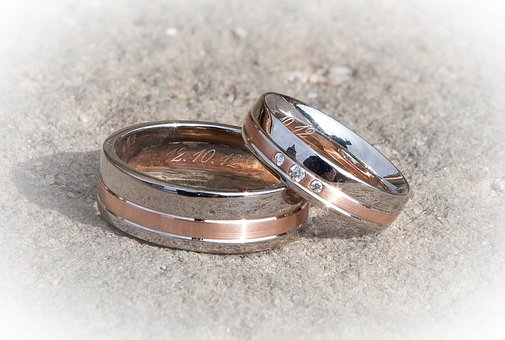 We've all attended weddings where one or both participants exchange rings.  Traditionally, the ring is placed on the fourth finger of the left hand (counting the thumb as one) but have you ever wondered where that tradition came from?

Out in this part of Alaska, many people exchange carved ivory rings rather than ones made of diamonds or metal.  Historically, it is believed rings were made of leather, ivory, or bone.

The belief associated with these rings was simply the more expensive the material the more the man loved her and the wealthier he was.  It wasn't until the Romans that the idea of ownership came into being.  When he gave her a ring, it meant he "claimed" her.  At the time, rings were made of iron because it represented strength and permanence. It is also believed they were the first to engrave rings.

Around 860 AD, Christians began using rings in wedding ceremonies but they were extremely decorated and the church didn't like that. So by the 13th century, rings became plainer and more appropriate as a symbol to represent a union of hearts.

Although rings have been worn on different fingers including the thumb there are several theories out on why the ring is worn on the fourth finger of the left hand.
1.  The tradition came from the Romans who placed the ring on the fourth finger because it was thought the finger contained a vein of love directly connected to the heart but this vein idea is false.

2.  In early Christian marriages, the priest started with the thumb saying "In the name of the Father", the first finger "the Son", the second finger "And the Holy Spirit", and slid the ring on the third finger or ring finger with the Amen.

3. Since most modern rings are made of gold which is a soft metal, it is less likely to be damaged because most of the world is right handed.

I don't know which is true, perhaps all of them are but I found it quite interesting to see the various thoughts on why we wear the ring on the ring finger.  Let me know what you think.