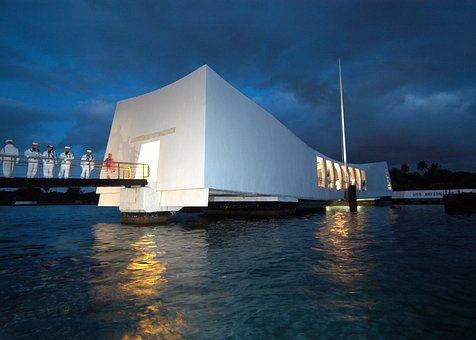 Yesterday, was December 7th.  The day Pearl Harbor was bombed 75 years ago.  Referred to as a Day of Infamy by Franklin Roosevelt, the president at the time.

There is one member of my family who was in Honolulu that Sunday morning when it happened.  He was only 17 and a senior in high school but he and so many others heard the bombings occur as Japanese planes flew over.

On Christmas day, he and the rest of his family left the Islands by ship to move to Washington  or Oregon where it was considered much safer.  Right after he graduated, he joined the navy and spent the rest of the war as a hospital corpsman.  His mother did her patriotic duty by working at Boeing, helping to build bombers.  She was one of those advertised as "Rosie the Riveter."

Fast forward to a day in September when the world was riveted to their televisions watching rerun after rerun of planes crashing into the World Trade Towers.  Anyone who was old enough remembers where they were when it happened.  We didn't have to wait for the news to flash across the radio.  We saw it right after the event.

I signed onto my computer to chat with a friend or two who asked me if I'd heard?  Of course I said "heard what?". At that point, they insisted I turn the television on and I was stunned with the news.  I taught at a community college so when I went in, everyone was trying to listen to the news.  The IT department provided regular updates but people were in disarray.

I had a friend who had flown to Boston for training and it was several days before I heard anything from here.  One of my students had family who were out touring New York at the time of the bombing.  It was several weeks before they were found in the hospital because other family members had to fly there and actually visit the hospitals one by one  until they found the unconscious person.  They were standing near the towers when the whole thing went down.

A co-workers husband was working in a building near the tower.  He could not leave the place until they got everything under control and as a journalist, he needed to stay so he could report on it.  In addition, I lost several students who disappeared without notice due to being called up.  The community college refunded their tuition for that semester due to having to serve for several months.

In a sense, this second event, 9/11 is my generation's day of Infamy due to the damage it did and due to the rallying effect it had.  The military had no trouble meeting quotas because eligible men rushed out to enlist just like after Pearl Harbor.  The two have so much in common including the loss of life.  I try to remember those who died in both attacks because most were innocent and did nothing to deserve having a life cut short.

Have a nice day.
Posted by Lee MacArthur at 4:00 AM

Email ThisBlogThis!Share to TwitterShare to FacebookShare to Pinterest
Labels: Day of Infamy