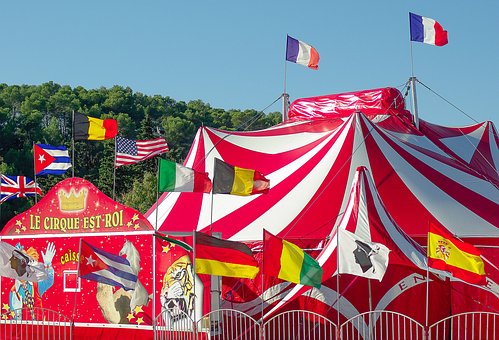 Do you remember when you were little and you decided to run away from home?  Where did you want to run?  Was it to the next block?  Or grandma's house? Or perhaps even the circus?  I don't think I ever made it past the end of the block.  Its hard to go anywhere when you have a big black Great Dane trailing you when you try to run away from home.

There was a movie years ago that starred Elizabeth Montgomery in which she played a person who ran away to the circus and made it there but times have changed.

The circus has only been around since the mid 18th century but the big top is a bit younger having come into use in the 1830's.  For a very long time, the circus traveled from town to town, stopping to put on a show for a few days before moving on.  It was a time when you could disappear and reinvent yourself as someone else.  It was a time when you did not need social security cards, birth certificates, or any of the Identification we must carry in today's world.

The circus offers the outsider a wonderful illusion of daring, of exposure to the exotic and strange, while making the whole experience safe. How often did anyone see elephants or bearded women in the past?  What about those trapeze artists who could fly through the air and be caught in such a way that you released a held breath before cheering in admiration at their skill.

The illusion was strong and inviting because people would escape their lives by running away with the circus in the hopes of finding a better or different life. It was sheer escapism but I'm sure those who did join the circus discovered it was tarnished and not as glorious as they thought.

I tried to find out where this phrase came from but could not.  I found lots of articles on how to join the circus now but only if you have certain skills and if the circus wants you.  I don't even know if circuses still come to town and pitch the big top or if those have gone but the memories are there for those who grew up with the circus held in a field somewhere and not at the convention center.

Let me know what you think!

Email ThisBlogThis!Share to TwitterShare to FacebookShare to Pinterest
Labels: Circus