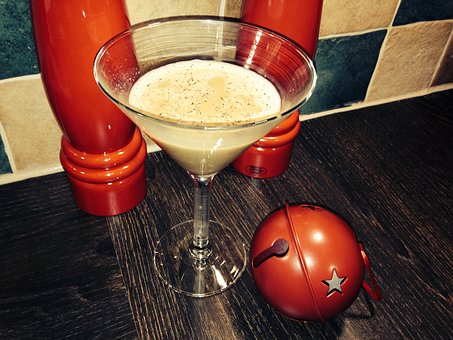 Last night, I watched one of those baking competitions on the Food Channel where they have certain ingredients they have to use in their cooking.  In this case it was the holiday favorite - Eggnog.

Its something I've grown up with but not all brands are created the same.  I've always wondered about the history of this drink.  Does it even have a history stretching back further than the turn of the century (20th).

Apparently, there is a record mentioning nog dating back to the 17th century. At this point in time, the term referred to a strong beer brewed in East Anglia while a noggin is the name for the cup used to imbibe nog in.  Historians believe our egg nog is descended from a posset which is a thick alcoholic drink made up of milk, spices and other ingredients.

The posset was popular in medieval times but by the 13th century, Monks often drank a posset with milk, eggs, and figs.  Since eggs, milk, and certain alcoholic drinks were expensive, the upper classes used this drink to toast for prosperity and good health.  By the 1700's egg based concoctions became popular in the early days of American colonies when everyone had access to milk, eggs, and rum.

In those days, everyone had their perfect recipe including George Washington. These early recipes often had rum, whiskey, sherry and brandy mixed in together with the eggs and milk. Unfortunately in today's marketplace, some commercial egg nogs have as little as one percent egg yolks due to the FDA.

At one point, eggnog was so popular that the lack of alcohol for the drink spawned a riot.  It was the winter of 1826 at West Point Academy where cadets always celebrated Christmas with spiked eggnog but that year, the superintendent prohibited alcohol from being brought on campus.  He went so far as to post guards but the young men persisted.  Unfortunately, tempers were high and fights broke out leaving a damaged campus.  19 cadets were expelled and West Point no longer celebrated as they had.

By this time, eggnog was associated with Christmas and considered part of the season.  It was one of the expected social drinks provided at this time of the year but it was not always drunk on Christmas.  In other places such as Baltimore, young man would call upon their friends, having a cup of nog at each house.  As the day progressed they become more drunk.

One other thing about eggnog historically is that it was drunk hot, not cold as we drink it now.  In addition, this drink lost the alcohol during prohibition unless you were willing to buy some illegally.  However, the non-alcoholic variety began making an appearance in stores in the late 1940's.  By the 1960's, non-alcoholic egg nogs joined the mainstream.

Now you know a bit more about eggnog.  Have a great season.