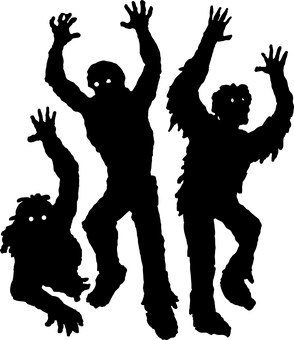 Zombies seem to be everywhere you look right now. They appear in books, movies, and even songs.  Everywhere!  There have been books written on zombie brains, zombie gardening, zombie knitting, and other topics.

The idea that zombies exist has been around since the 8th century in the Congo and can be found in several different cultures. As far as humans go, there are a few movies and shows which have people turning into zombies due a disease but in reality zombies do not exist but there are zombies in nature.

Certain species of ants can turn into zombies!  Imagine that! There exists a fungus whose parasitic nature allows it to manipulate the brains of these species of ants.  The fungus only releases its mind controlling chemicals to the proper host.

The fungus uses the to complete its life cycle. The ants encounter the fungal spores while foraging  for food.  The spores transfer into the ant where they invade the body.   When the infection reaches the brain, chemicals are released and take over the ant's central nervous system forcing the ant to clamp down on a leaf or twig.  At this point the fungus kills the ant and forces a stalk to grow out of the ant's head. When its ready, the stalk releases more spores to infect more ants.

The fungus itself is only attracted to one or two varieties of carpenter ants found in South America.  Research indicates that if an infected ant stays in the nest, the fungus in unable to develop either due to conditions not being right or because they are thrown out by healthy ants.  It appears the fungus also drives the infected ants out so they can get to a place where the fungus is able to reproduce.

It is possible the idea for a plague spreading through the land and turning people into zombies might have come from these creatures or its possible its extrapolated from the fact that people infected with rabies often appear totally insane due to its effects on the central nervous system.

If this virus mutated so the incubation period was shortened to a day or two and it became airborne rather than transmitted through bites, it could produce zombie like creatures. Don't worry at this point in time it is extremely difficult to genetically engineer such a virus which means it would be even more difficult to take over the world using this.

So the next time you watch the Walking Dead or World War Z, rest assured that there is no plague or virus out there to make these scenarios true.  Enjoy and let me know what you think.

Email ThisBlogThis!Share to TwitterShare to FacebookShare to Pinterest
Labels: Zombies