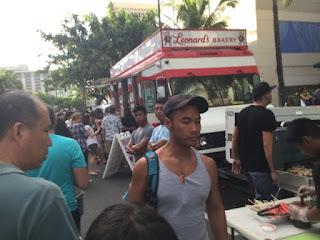 Every year, the Pan Pacific festival is held the weekend closest to Kamehameha day.  The Pan Pacific Festival is a celebration of music and dance with both Japanese and American performers.

Today, I have pictures of the block party.  The city closed off four blocks on  Kalakaua Street and venders pitched tents and parked mobile food trucks along the distance. 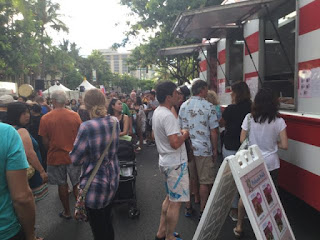 By 6:00, the blocks were filled with people anxious to try all the tasty foods offered, check out the music and dance, or purchase some locally produced goods.   The truck you see in these pictures is from Leonard's Malasadas also known as Portuguese Doughnuts.  They differ in they have no hole.

Leonard's is so popular, the line started forming as soon as they parked the wagon.  Yes, I was the first one in line because these tasty treats are better than any other doughnut you have tasted.

Next to Leonard's was a southern style food place with BBQ, fried Catfish and other delicacies.  Along the way, I found a wonderful Yakisoba place willing to make a vegetarian version.  It was great. 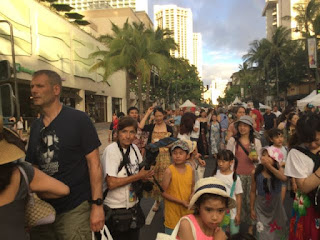 It was so full of people, I walked from one end to the other and then headed back to my hotel.  You can see how crowded the party is by 6:30.  There were 4 stages spaced down the street, with entertainment beginning around 7PM.

The people who are most dangerous are the ones who are walking backwards with selfie sticks.  They are trying to record themselves at the event but they do not pay attention to where they are going. 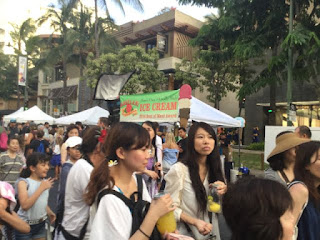 I didn't stop at this ice cream place because I prefer flavors such as Mango, Guava, Lychee, Ube(a purple yam) or other local flavors.  They had mostly standard flavors with chocolate.

Most booths, including this one, had long lines of waiting patrons, anxious to try the offerings.  I think I saw people tasting their way down the street.   One group sold flavored lemonades in quart jars.  Notice the two ladies who are enjoying their lemonade. 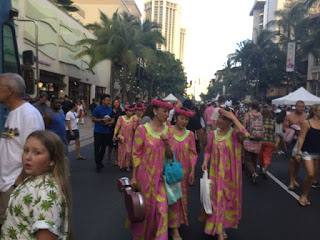 Groups strolled down the street either heading to or from a stage.  Most stages started with the Kyoto type drumming, a synchronized form of drumming from Japan.

There were also Hula dancers and other dancers who performed.  The group you see in the picture are most likely Japanese who flew in from Japan to perform.  Yes, Japan has Hula schools whose students come over to perform. 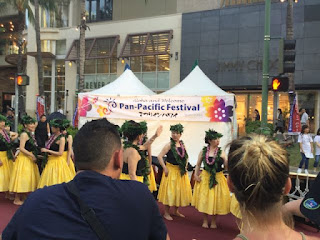 This group of hula dancers are getting ready to perform.  It looks like they are in front of one of the original hotels in Waikiki.

I kept watching the leader try to let the sound guys know to cut the music so she and her group could start.  In the meantime, she instructed her students on entering the stage for the performance.

It went on till 9 or 10 PM.  Don't doubt this is a block party, Honolulu style but still a block party.  Waikiki has officers who monitored both ends and some who patrolled on bicycles.  I try to visit Honolulu around this weekend so I can enjoy everything offered.

Have a good day, enjoy the photos and let me know what you think!

Email ThisBlogThis!Share to TwitterShare to FacebookShare to Pinterest
Labels: The weekend.