We flew into Hawaii this past Sunday.  We spent most of the day traveling from Fairbanks, to Anchorage, and finally to Hawaii, arriving at around 7:30 in the evening but no one had put the agricultural forms on board so we had to wait for those to be delivered.  Once every family filled the forms out and turned them in, they finally allowed us to leave. 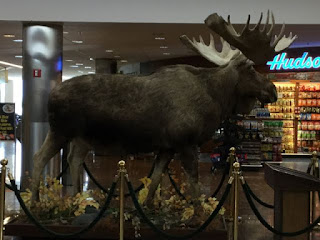 This moose is in the center between concourse C  and B, near the exit from security.  Everyone files by as they head to their flights.  This area also has a place with Alaskan food, books, a couple of restaurants and a place you can purchase locally made alcohol to take with you when you head off.

I've found unique growlers, filled them with a locally made ale for a relative in Pennsylvania who collects them.  He enjoys the liquid in them.  This company also made a fantastic nonalcoholic blueberry soda a few years ago but have since discontinued its production. 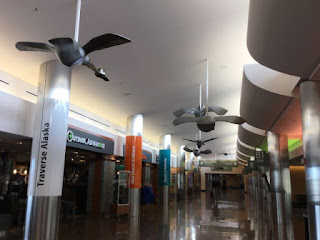 I found the bird sculptures much more interesting than stuff for sale in the stores at the airport.  I almost missed the birds standing off to either side, carefully hidden near a few of the gates.  They all had character. 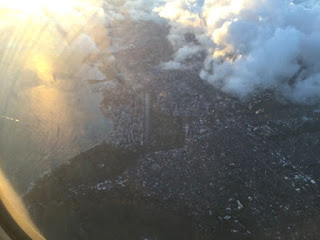 This picture was taken as the plane headed towards the Honolulu International Airport.  It was taken from the window so the view isn't too bad.

By this time, I was so ready to land.  I really dislike sitting for about 6 hours at any one time.  I'm so used to moving around that I find sitting way too hard.

On the other hand, its faster than taking a boat.  I remember my grandmother saying she first moved to Hawaii back in 1938, well before it became a state.  I think she said she went over by ship.  I do know she and her children left Hawaii on Christmas Day in 1941 due to Pearl Harbor being bombed.  During the war, she worked for Boeing as one of many who helped out. 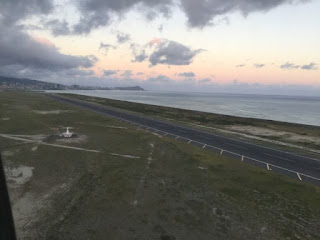 To the right, you get a great view of the ocean to the side of the airport.  In the foreground is Waikiki, where most of the hotels are found.  There are still two or three hotels from the mid to late 1800's but most are fairly new.

The airport has been in the same location since 1927 or so but wasn't considered an international airport till 1951.  Its sort of the gateway to the south pacific and the orient. 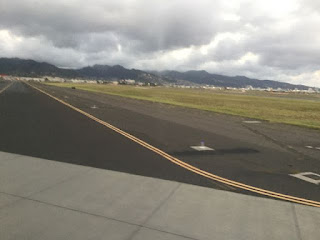 We have landed and are rolling towards the terminal.  It feels like you travel for quite a few minutes before pulling up to a gate.

If you have not been there, the state requires everyone to fill out an agricultural form listing any plants or animals you bring into the state.  They also check all luggage to make sure you are not taking anything illegal back to the mainland. 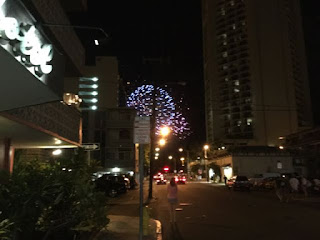 After finding my luggage, I grabbed a shuttle and finally made it to my hotel.  I just got to the desk around 8:30 when the front desk attendant asked if she could wait about 30 min to check me in so we could watch the huge fireworks show.

The hotel I stay at is about 2 blocks from the ocean.  The fireworks are launched from barges sitting in the ocean just off of Waikiki.  One of the hotels traditionally fires off some every Friday night but this was a special 30th anniversary for some Japanese company. 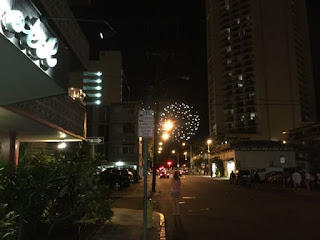 Of course I said I was happy to wait.  At this time of the year, I do not get to see any fireworks displays in Alaska because it never gets dark enough.

The only time I see fireworks displays is at New Years when it is dark enough.  So this was quite the novelty and I enjoyed every single moment of it. 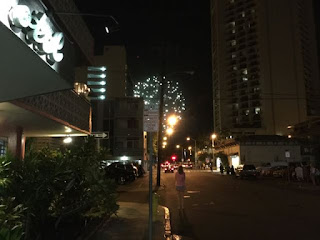 Tomorrow, I'll share some photos with you of dancers and musicians who provide a weekly show at the hotel I stay at.

They are locals who treat everyone as if they are family and it is so much fun.

I hope you enjoyed these pictures.  I have a trip scheduled to spend a day going around the island and I plan to take lots of pictures to share with everyone.

I am interested in checking out how much has changed since I lived here.  Please let me know what you think.  Have a good one.
Posted by Lee MacArthur at 4:00 AM

Email ThisBlogThis!Share to TwitterShare to FacebookShare to Pinterest
Labels: Trip to Honolulu