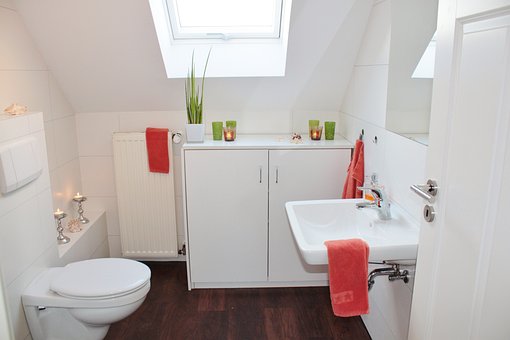 This past winter, the fuel truck did not make a delivery when scheduled, nor did they call to notify us.  Here in Alaska, we rely on heating oil to run our heaters so we stay warm.

Unfortunately, this caused a few pipes to burst when things warmed up.  My house sitter was off for a few weeks at the same time.

So when I got home for the summer, there was no running water.  Got the plumber in to fix a few things so I have cold water at least.  In the process of checking out what still worked, I discovered the floater in the toilet tank had cracked.

In addition, the pipe in the kitchen is leaking so it is one step at a time.  Back to the toilet.  I headed in to town to buy a replacement floater for the tank and a toilet seal for under the toilet.  When I got home, I was ready to attack the toilet.

I'm lucky in that a family member moved into the unfinished basement to help out, save money, and watch the house over the winter while I'm gone.  He gave me a hand.  The first thing we did was drain the water from the toilet.  In the process, I discovered the section where the water drains out was chipped and slugging off splinters.  Once everything was try , it was time to attack the bolts on the floor.  Unfortunately, they were rusted and broke off, leaving the heads under the wax ring.

At this point, I looked at the young man, he looked at me and we both knew, we needed a new toilet.   It wasn't worth trying to fix the old one.  There is a vast array of possible toilets with single flush, duel flush, 1.1 gallons per flush (GPF), 1.6 gpf, 1.28 gpf, ADA complient, circular, elongated.  I just stared at the choices.

I gave up, grabbed a clerk who looked like he knew what he was doing and asked for help.  After some discussion, I settled on a duel flush toilet for $107.00 and got it home.  It was harder shopping for it than installing it.

For future reference, you unbolt the old toilet from the floor, take it out.  Be sure to clean under and around the area so you don't have any left over crud in the area.  Dig the old wax ring out and make sure you've cleaned all the wax off the flange or the whole of the pipe.

Instead of using the wax ring, I used a polyurethane ring because it is supposed to be more forgiving than the wax ring.  So we put new bolts in the slots, I slid the new ring down over the open hole of the flange.  Next, the new toilet base was slid over the bolts so it sat on top of the ring and we bolted it down.  He placed the reservoir on the back end of the base, squared it before fastening it down.

The third step required him to place the plunger in the lid so the two sides lined up properly with the appropriate switch.  Last was attaching the seat to the toilet.  Voila and it worked beautifully.

As I typed this, I realized I should have taken pictures but I never thought about it because I was heavily involved in the process.  This is the second time I've replaced a toilet ring and the first time I've helped replace the whole toilet.

Next project is to help hang walls in the basement so the plumber can install the toilet and shower downstairs.  After that, it is getting the hot water up and running while fixing the leak in the kitchen sink.

Let me know what you think.  Have a good day.
Posted by Lee MacArthur at 4:00 AM

Email ThisBlogThis!Share to TwitterShare to FacebookShare to Pinterest
Labels: Replacing the toilet.